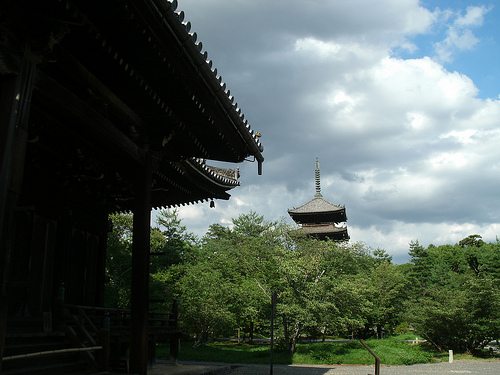 The temple's pagoda, as seen from the Kannon-dô (both Important Cultural Properties dating to the 1640s)

Ninna-ji, located in northwestern central Kyoto, is the head temple of the Omoro sect of Shingon Buddhism in Japan. It is considered a part of the UNESCO World Heritage Site "Historic Monuments of Ancient Kyoto (Kyoto, Uji and Otsu Cities)," along with sixteen other temples, Shinto shrines, and other sites.

The temple was built in the 9th century, being finally formally established and named "Ninna-ji" by Emperor Uda in 888. Emperor Uda then went on to reside on the temple grounds for roughly thirty years following his retirement.

Many of the buildings extant today at Ninna-ji date to the time of the third Tokugawa shogun, Tokugawa Iemitsu (r. 1623-1651). The temple's kondô (main hall, lit. "golden hall"), today designated a National Treasure, was formerly a part of the Kyoto Imperial Palace compound; the bell tower, Mie-dô, Kannon-dô, sutra hall, five-story pagoda, and Niô-mon (gate) all date to the time of Tokugawa Iemitsu, and are all considered Important Cultural Properties.