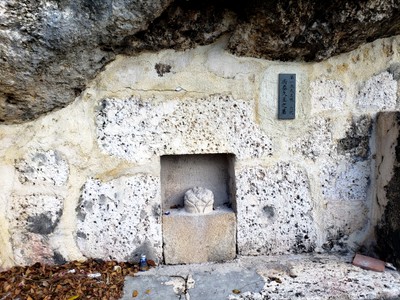 Shô Taikyû was a king of the Kingdom of Ryûkyû, the sixth of the line of the first Shô Dynasty. His reign saw the construction of many Buddhist temples, and the casting of the "Bridge of Nations" Bell (万国津梁の鐘, Bankoku shinryô no kane).

According to traditional histories, Shô Taikyû was the seventh son of Shô Hashi, founder of the Kingdom of Ryûkyû and of the Shô Dynasty. In 1453, he was named Prince of Goeku, and given Goeku magiri (today part of Okinawa City) as his domain[1].

When King Shô Kinpuku died in 1453, a succession dispute erupted between the king's son Shiro (志魯) and his younger brother Furi (布里). Shuri Castle was burned down in the conflict, which ended in the death of both Shiro and Furi, and the succession of Shô Taikyû to the throne[1].

Gregory Smits indicates there are many inconsistencies in Shô Taikyû's story, however, and suggests that rather than necessarily being a son of Shô Hashi as the kingdom's official histories relate, he may have been someone outside of the line who seized power. Various historical sources - including the Bridge of Nations Bell, multiple official histories of the kingdom, and the Veritable Records of the Ming - describe Taikyû variously as a son or brother of Shô Kinpuku, and describe him as "Prince of Goeku," despite the kingdom not yet bestowing such titles in a systematic manner. Given all of this, and the absence of any representation in the Omoro sôshi of Taikyû as a son of Shô Hashi, Smits suggests that Taikyû was likely not a direct relative of the royal lineage, but rather the son of a local lord in Goeku, who later seized power in the fashion of a local warlord or wakô.[2]

Having studied under Kaiin, a Zen monk from Kyoto[3], Shô Taikyû had a number of Buddhist temples founded, including the Kôgen-ji, Fumon-ji, Manju-ji, and Tenryû-ji[4][5], and had some 23 bronze bells cast, including the so-called "Bridge of Nations" Bell.[3][6] The bell, with an inscription describing the kingdom's prosperity in maritime trade and diplomacy, hung in Shuri Castle for centuries and became a famous symbol of the castle and of the kingdom. Taikyû was also the first Okinawan ruler to have coins cast. Though these were of poor quality, and may have been produced from Ming coins, simply replacing half the inscription Yǒnglè tōngbǎo 永楽通宝 from coins minted by the Yongle Emperor, such that his own coins read (in Japanese) Taisei tsûhô 大世通宝, this was nevertheless a notable accomplishment; Smits suggests that both the casting of coins and of bells may have been part of efforts by Taikyû to assert or construct notions of his legitimacy - if he had in fact seized power from a more rightful ruler or heir.[7]

Shô Taikyû's reign was, indeed, a period of prosperity in maritime trade. Historian George H. Kerr writes that Okinawan merchants sometimes earned as much as a thousand-percent return on luxury goods, that Naha grew more fully into a prosperous-looking port town, and the estates of the local lords (anji) grew as well. However, Kerr also writes that Shô Taikyû's patronage of Buddhism and temple-building efforts far exceeded that which would have been demanded or supported by the populace, and that these activities impoverished the royal treasury[8].

The reign of Shô Taikyû also saw one of the more famous episodes of political intrigues among the anji in the history & legends of the kingdom. Informed by Amawari, lord of Katsuren gusuku and son-in-law of the king, that Gosamaru, lord of Nakagusuku gusuku and father-in-law to Shô Taikyû, was plotting to overthrow the kingdom, Shô Taikyû allowed Amawari to lead a royal contingent to subjugate Nakagusuku. Following Gosamaru's defeat and subsequent death, the king discovered that it was in fact Amawari who had been plotting against him from the beginning, and whose schemes led to the destruction of a loyal retainer. Katsuren was then subsequently attacked, and Amawari captured and executed[9][10].

Upon his death in 1461, Shô Taikyû was succeeded by Shô Toku, traditionally said to have been his biological heir. Taikyû was originally entombed elsewhere, but his remains and those of his eldest son Ashitomi ganashi were moved in 1908 to their current location in the Tamagusuku area of Nanjô City.[11]