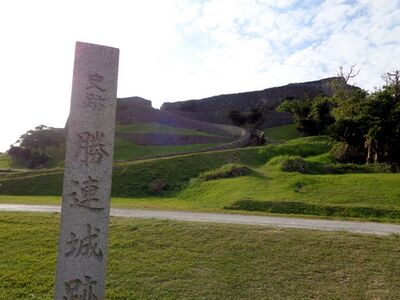 The ruins of Katsuren castle as seen from the fourth enclosure, with a marker identifying it as a [Nationally Designated] Historic Site 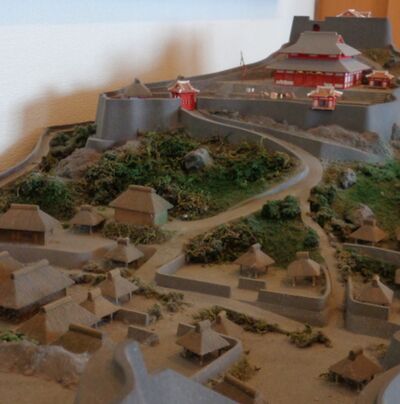 Katsuren castle was an Okinawan gusuku fortress on the Katsuren (or Yokatsu) peninsula, in the northeast of central Okinawa. Built around the 12th or 13th centuries, the castle suddenly became a major center of regional trade in Chinese porcelains and other high-quality items in the 14th and [early] 15th centuries, and flourished until its fall in 1458, when the tenth lord of the castle, Amawari, was defeated by the armies of the royal government of the Ryûkyû Kingdom.

The first lord of Katsuren, or Katsuren anji, is said to have been the fifth son of King Taisei (r. 1300-1308). His son and successor, the second lord of Katsuren, married his daughter to King Satto (r. 1355-1395), further strengthening the ties between the lineage of the lords of Katsuren and that of the royal family.

Katsuren is one of only a few large gusuku known to have used Korean roof tiles on its structures. The gusuku seems to also have had some direct contact with Korea; two official records of the Joseon (Korean) royal court relate that in 1418 a lord calling himself simply "Katsuren gusuku" and claiming to be the younger brother or second son of the king sent letters and later an envoy (and gifts) to the king of Korea. Gregory Smits suggests that this unnamed "[lord of] Katsuren gusuku" may have been King Shô Hashi himself, or someone within his household. The Omoro sôshi suggests that Shô Kinpuku and Shô Furi, both sons of Shô Hashi, were at one time or another lords of Katsuren.[1]

The tenth lord of Katsuren is easily the most famous. Amawari, who married Momoto Fumiagari, a daughter of King Shô Taikyû, warned the royal government of treasonous plots by Gosamaru, lord of Nakagusuku, and helped the royal armies attack and take Nakagusuku castle in 1458. However, before the end of that same year, the royal government turned on Amawari, after some number of people at court suggested that Gosamaru may have been innocent, and that Amawari's accusations may have been a plot on his own part to destroy Gosamaru, and further, that Amawari might even be plotting against the royal government himself. Thus, Katsuren was also besieged and taken by the royal government, and Amawari killed. Today, some suggest that the entire affair may have been a scheme by the royal government to eliminate both of these strong and dangerous political rivals.[2] Others, particularly locals of the Nakagusuku and Katsuren areas, support stories presenting one side or the other as the tragic hero. Indeed, local tradition has it that earlier lords of Katsuren, and the 9th lord in particular, were tyrannical despots and drunkards, that Amawari was the popular choice and was actively supported by the local people in his overthrow of the 9th lord, and that as ruler, he was a most gracious lord who brought great prosperity to the domain. By contrast, the plot of the popular kumi udui play Nidû tichiuchi features fictional sons of Gosamaru as the protagonists, and paints Amawari as the villain against whom the two sons seek vengeance.

Amawari's widow, Momoto Fumiagari, is sometimes said to have been a granddaughter of Gosamaru, on her mother's side. According to some versions of the history, it was Momoto who, out of loyalty to her grandfather and/or to the kingdom, traveled with her attendant Oni Ôgusuku to Shuri to warn the government of Amawari's duplicity. Following Amawari's defeat and death, she then married Ôgusuku.[3]

From the fall of the castle in 1458 through roughly the 17th century, the castle was used by the local people in some fashion, but little is known about this period in any detail.

Excavations on the grounds were begun in 1965 by the Ryukyu Government Cultural Properties Protection Agency (part of the Okinawan civil self-government under US martial Occupation), and in 1972, following the return of Okinawa to Japanese sovereignty, the site was named a National Historic Site. The site was named in 2000 as one of the sites included within the umbrella UNESCO World Heritage Site designation "Gusuku Sites and Related Properties of the Kingdom of Ryukyu." Today, the Katsuren Castle Site Maintenance Project receives funding from the Agency for Cultural Affairs (aka Bunkachô, an agency within the Japanese national government), and the cultural office of the Uruma City Board of Education is overseeing archaeological excavations and restoration efforts. Excavation efforts began in earnest in 2012, with a focus on the fourth enclosure (yon-no-kuruwa), and excavations of the eastern and northern portions of this area, and of the area immediately around the Nishihara Gate, were completed in 2015.

Katsuren is a model example of gusuku layout, with five enclosures, or kuruwa, nested into one another, moving down the hill, from the smallest and highest "first enclosure" (ichi no kuruwa), where the castle's treasures may have been kept, down to the largest and lowest sections of the castle, which served to support and protect what was located further uphill.

The first enclosure is located to the northwest, roughly 98 meters above sea level at its highest point, atop a limestone hill. From the top, one can see Kin Bay and the Pacific Ocean to the north, and the Chinen peninsula, Nakagusuku Bay, and Nakagusuku gusuku to the south. It's believed this smallest, highest, and most well-protected of the enclosures may have been used chiefly as a storage site, and for protecting and enshrining the castle's chief sacred spaces. The hearth deity (fii-nu-kan) was likely enshrined here, and a stone known as Tamanomiuji-taki, where the deity Kobatsukasa would have been worshipped, still stands in the center of the first enclosure. Excavated stones suggest that a stone arch with carved arabesque designs, fairly ornate for the time, once stood here.

The second enclosure, just down the hill from the first, held the main residence of the lord and his family, and the main administrative buildings of his court. The largest building in this area is believed to have been 17 meters by 14.5 meters in size, a rather sizable structure. A cave on the west side of the enclosure, known as Ushinujigama, may have been used to provide an escape route in case of emergency.

The fortress then continues downhill, through a third and fourth enclosure, with the fourth being at the bottom of a valley, representing the ground level of the fortress complex, and including the main gates of the complex as a whole. Beyond the fourth enclosure is the east enclosure (higashi no kuruwa), which sits on a slight elevation compared to the fourth. These areas contained simpler homes, and some amount of land used for agricultural purposes; Katsuren is known to have been home to numerous cattle and horses, as well as some number of imported tropical creatures such as parrots. The third enclosure is also believed to have included a large open area for conducting ceremonies. A large stone called Tunumutu was regularly used by noro (local priestesses) as a place to sit and rest when they came to the castle; nearby are a number of small sacred spaces, chiefly in the form of small caves dug into the hillside. One of these, known as Kimutaka-no-utaki, is dedicated to the worship of the Ishizuka deity.

Just outside the walls to the south was an area of swampy land which was used for growing crops and as a source of fresh water; the swampy terrain also served to protect the castle from invasion from that direction. A nearby spring known as Akôji gaa (Akôji spring) was also an important source of fresh water.[4] A set of stone stairs circling clockwise up into the castle complex was specifically designed to be quite steep, tiring potential attackers and allowing defenders within the walls to clearly see and easily attack any such intruders.[5]

This overall shape of the fortress, long and narrow, with elevations at both ends and dipping in the middle, has traditionally often been compared to the image of a sailing ship. Excavations in the area of the fourth enclosure in 2012-2013 revealed foundation stones and other indications that the fourth enclosure likely once held sizable wooden buildings like the second enclosure (the main palace) did. Archaeological work in 2014-2015 then uncovered a cobblestone (ishi-tatami) path leading from the main gate of the compound, the Nishihara Gate (Nishihara ujô), into the fourth enclosure. They also discovered some 73 gun emplacements, and some number of bunkers, built in the 1930s when defensive positions were being constructed across much of Okinawa Island, in anticipation of the Pacific War. While the Nishihara Gate stood on the northeast side of the compound, a second gate, known as the Haebaru Gate (Feebaru ujô) stood on the opposite side of the fourth enclosure, to the southwest.

Excavations over the years have discovered numerous examples of Chinese porcelains, Chinese and Japanese coins, and Japanese weapons and armor, dice, hairpins, smoking pipes, roof tiles, as well as objects from Southeast Asia, evidence that Katsuren was well-connected into rich networks of maritime trade; this also shows that medieval Okinawan warriors/lords employed Japanese (samurai) weapons and armor. In 2013, archaeological efforts uncovered a group of ten coins from outside of East Asia; later research determined that four of these coins were likely minted in the Roman Empire in the 4th century, and one in the 17th century Ottoman Empire. This is the first discovery of Roman coins anywhere in Japan; while it is believed that the older coins were likely obtained from Ming Dynasty China in the 14th or 15th century (the time of Katsuren's prominence), or perhaps even at a later date (given the inclusion of a 17th c. Ottoman coin), this nevertheless shows Okinawa's great interconnection into East Asian and world networks, perhaps in some ways (at some times) even greater than that of mainland Japan merchants or elites. Lines in the Omoro sôshi describe Katsuren as featuring two splendid ports, with boats arriving both at Terumahama on Kin Bay and at Hamakawa on Nakagusuku Bay.