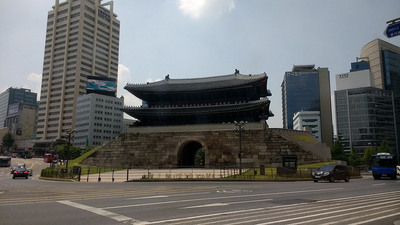 Namdaemun, historically, the main southern gate of the city.

Seoul is the capital of the Republic of Korea (i.e. South Korea), and was previously the royal capital of the Joseon Dynasty and of the Korean Empire.

Seoul (then called Hanseong) was made the royal capital in 1394, following the fall of the Goryeo Kingdom. Construction of the new royal palace was completed the following year, along with Jongmyo Shrine (a shrine to the royal ancestors) and the Sajikdan Altar. The city walls were completed the next year, in 1396.

The city was captured by samurai forces under Konishi Yukinaga and Katô Kiyomasa in 1592/5, and much of it was destroyed. Jongmyo Shrine and Changdeokgung Palace were rebuilt by 1608. A new palace, Gyeonghuigung Palace, was completed in 1620.

In the early modern period, there were eight main gates providing entry into Seoul's city walls.[1]

The court ordered the dredging of the Chonggyecheon Stream in 1760.

A Japanese legation was established in the city in 1880;[2] the US legation was established in 1883, followed by Russian, French, and German ones, as well as Western churches, schools, hospitals, and hotels. By around 1900, there were roughly 300 Westerners living in Seoul. Electric streetcar routes were also built through the city around this time, including rails running through some of the city gates.[1]

Seoul was renamed Keijô (K: Gyeongseong) by the Japanese during the colonial period, from 1910 to 1945.