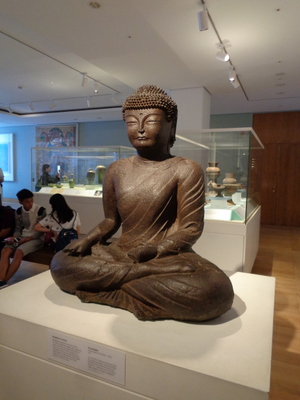 An iron Buddha from the 10th or 11th century, on display at the British Museum

Goryeo, also known as Koryŏ, was a Korean kingdom lasting from 918 until 1392.

Goryeo was first established by Wang Geon, aka King Taejo of Goryeo, in 918, and conquered United Silla in 935. Taejo established Gaegyeong as the royal capital in 919, constructing a royal palace, government offices, temples, and a system of roads. City walls were added in 1026. Little remains of this Goryeo-era capital, however, at the foot of Mt. Songak in North Korea; archaeological excavations have found only several sets of stone stairs and stone palace foundations.[1]

Goryeo adopted a system akin to the Chinese imperial examinations to find and appoint officials, in the 10th century; however, its political culture was far more dominated by Buddhist notions and rituals than by Confucian ones. The dynasty saw the first carving of woodblocks for a printing of the complete Buddhist Tripitaka, in 1011-1087. As in China, though the examination system ostensibly made government posts open to everyone, in practice an elite class quickly emerged composed of families whose members regularly received posts Fifth Rank and above; these families forged a complex closed system of intermarriages, strengthening their identity as a distinct elite class.

To the extent that Goryeo did perform Chinese/Confucian political rituals, it did so in ways that were often at odds with its subordinate, tributary status within the Sinocentric world order. Goryeo sent tributary embassies to Song Dynasty China from 968 to 1020. But, the Goryeo Court practiced many things which Chinese models would have dictated were restricted only to the Emperor of China, and which should not be performed by a tributary king. These included referring to the rulers of Goryeo, at times, as hwangje (C: huangdi), p'yeha (C: bixia, J: [tennô] heika), or as “Son of Heaven of/on the East Sea” (東海天子), all terms implying an Imperial, rather than a kingly, status. Further, the kings of Goryeo often wore Imperial yellow, and referred to their realm as "all under Heaven" (K: cheonha, C: tianxia, J: tenka). They emulated the Chinese model in granting their kings temple names ending in -jong (宗, C: -zong) or -jo (祖, C: -zu), performed sacrifices to Heaven and other rituals which were only supposed to be performed by an Emperor, and even claimed other peoples as tributaries, at times. Historian Evelyn Rawski describes all of these practices as a display of how a country like Korea can perform a role within the China-centered regional order, while simultaneously asserting a distinctive identity.[2]

The height of production of Goryeo celadon wares, and the invention of moveable type, took place in the 12th-13th centuries.

Goryeo was invaded by the Liao Dynasty (Khitans) in the 990s, and by the Mongols beginning in 1231.[3] Mongol forces invaded Korea six times in the 1230s-1250s; though Goryeo initially attempted to sue for peace, it later turned to active resistance, holding off the Mongol invasions for nearly three decades before finally agreeing to acknowledge Mongol authority or superiority, so long as the Mongols withdrew from Korean soil.[4] Over the following century or so, a number of Goryeo kings married Yuan (Mongol) princesses; as at least one scholar of Korean history has written, "the royal house of Koryŏ became nothing more than a branch of the Mongol ruling family."[5] Yet, despite this submission to Mongol suzerainty, the dynasty is considered to have continued until 1392, when it was succeeded by the Joseon Dynasty.

Though Goryeo remained independent from direct control by the Mongol Empire, Mongol authorities nevertheless interfered in Korea on a number of occasions, establishing post stations, conducting population surveys, and demanding hostages, provisions, and troops for the Mongol armies.[4]

In 1370, two years after the founding of China's Ming dynasty, King Gongmin became the first king of Goryeo to receive investiture from the Ming.[6]

Goryeo first established formal relations with the Okinawan kingdom of Chûzan in 1389, three years before the dynasty fell, but relations are believed to have continued relatively uninterrupted through that transition. Goryeo also enjoyed imports from Southeast Asia, including sappanwood, aloeswood, and other tropical products, carried via Chinese or Japanese merchants.[7]