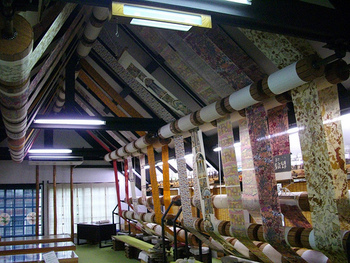 Bolts of cloth being hand-dyed at a workshop in Shuri.

Of its various traditional crafts, Ryûkyû is perhaps most well-known for its textiles. Though heavily influenced by China, Japan, and other cultures, Ryûkyû had its own distinctive forms and styles of garments, from the royalty and aristocracy down to that worn by the peasants, as well as its own distinctive techniques. Ryukyuan textiles were prized enough that they were a very common tribute good sent to China and Japan, as well as exported in great volumes as a trade good, i.e. commercially.

There are six types of fibers used traditionally in Ryukyuan textiles: bashôfu (banana fiber cloth), jôfu (ramie), cotton, hemp, silk, including tsumugi (silk pongee), and finally tunbian, or agave fiber, the use of which is limited chiefly to Miyakojima. 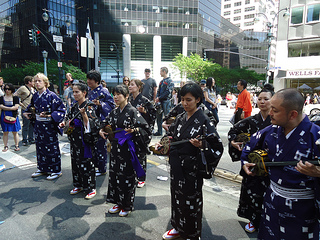 Textiles are traditionally dyed or decorated in a variety of ways as well. Bingata (also known as katachiki), a form of resist dyeing in which a paste-like material is used with a stencil to control which areas would be dyed, is perhaps the most famous, and involves boldly colorful patterns, often against a boldly yellow or pink ground; bingata is strongly associated with the aristocracy. Meanwhile, Ryûkyû is also known for its hana-ui brocades, ro gauze weaving, and kasuri or ikat, a form of resist-dyeing in which the threads are dyed first, before being woven into the garment, creating geometric and other patterns in a two-tone (e.g. indigo and undyed white) palette.

As in China, yellow was considered an aristocratic or royal color, and the wearing of yellow garments was limited to those of elite status; not only bingata but also other royal & aristocratic garments were often dyed yellow head to toe, using minerals such as orpiment (J: sekiô)[5] or plant materials such as turmeric or huáng bò.[6][7]

Another particular type of silk cloth associated with Ryûkyû is known as tabby (二彩 or タビー, tabii). Originally a famous product of China's Guangdong province, it was among the chief types of textiles transshipped through or exported by Ryûkyû.[8]

Indigo-dyeing has been practiced in the islands since ancient times, and enjoyed protections from the royal government. The processes used in the Ryukyus are different from those used in mainland Japan, and are said to be more complex, and difficult. Though once produced in various places throughout the islands, indigo-dyeing is today largely restricted to the Motobu area of northern Okinawa Island.[9]

Ryukyuan robes, or ryûsô (琉装), are quite similar to Japanese kimono, but are not cut identically. The open ends of the sleeves are left completely open, rather than being sewn up halfway and forming a sort of pocket at the end of the sleeve as in Japanese kimono. Meanwhile, where Japanese kimono often have an open, disconnected, section where the sleeve meets the body of the garment, in Ryukyuan garments this is not typically left open. Instead, sleeves are fully attached to the body of the garment, often with a triangular "gusset," an extra piece of fabric under the arm (where the sleeve meets the body) that adds greater range of motion at the shoulders. The collar generally extends all the way down the garment, and is often rolled out or rolled back, forming a visible band of color down the front.[10]

Like the Japanese kimono, Ryukyuan robes tend to be made from a single straight bolt of cloth, and not from pieces cut out according to a pattern. One of the key differences, however, outside of the colors and patterns on the garment, is that Ryukyuan robes tend not to be tucked up under an obi (belt) the way Japanese ones are, and so the robe needs to be the appropriate length for the wearer. Ryukyuan robes also tend to be cut wider. Various types of ties or belts are sometimes used, however; sometimes, a himo, or tie, is even tied on the inside of the garment, in a manner particularly distinctive of the Ryukyuan style, and not used for Japanese garments.

Basic forms of Ryukyuan garments include the unlined, single-layer tanashi worn in the summer, and the watajin, with lining for the winter, though the climate remains quite mild in Okinawa in the winter. The watajin had longer, wider sleeves, and the lining often featured bingata or kasuri patterns. Such robes were often worn with the collar turned down, revealing the color and pattern of the inner lining.

While the royal and aristocratic classes are today strongly associated with the colorful bingata, traditionally they would have worn bingata robes only when going out of the palace; in the private areas of the castle, members of the royal family were more likely to wear a simpler outfit of a red dujin wrap-shirt and white kakan skirt, throwing a bingata robe over this when going out.[11] Bingata was not generally worn for major court ceremonies, and further it was typically only worn by adult women and by young people (both male and female); adult men typically only wore bingata as a costume for dance or theater.[12]

By contrast, the typical men's garment worn during official duties was a simple black robe, cinched at the waist. Known as kuruchô (黒朝, lit. "black court [robes]"), it was often made of extremely fine bashôfu fibers, woven so finely as to have a texture similar to silk.[13]

The colors of women's garments were also significant, indicating the rank of their husband or family. The queen and royal princesses wore goldish yellow silk or satin damask, a color long considered an Imperial color in China, while wives of anji or ueekata wore kasuri (ikat) fabrics, especially tsumugi, in green or pale blue (or yellow, for higher-ranking anji families). Pink kasuri garments indicated wives of those of peechin or satunushi status, while the wives of the chikudun, the lowest-ranking nobles, wore blue kasuri. The highest ranking noblewomen wore gold hairpins, while other noblewomen wore silver; commoners wore hairpins made of copper, brass, bronze, wood, or other materials. Deep blue garments dyed with indigo were standard among the commoner/peasant class; these were made of various materials, including bashôfu and cotton, but excluding ramie (jôfu), which was off-limits for commoners. Kasuri garments were worn by members of all classes, from the royalty down to the peasantry,[14] but particularly large kasuri patterns were limited to the aristocracy.[15]

The production and consumption of Okinawan textiles saw a major shift after the Japanese government's kyûkan onzon (preserving old customs) policy was ended in 1903, along with the traditional poll tax, and assimilation policies began to be put into place. Whereas the poll tax had previously been paid in handmade textiles, commercial production and sale now began to dominate. Assimilationist rhetoric promoted the wearing of Japanese-style kimono as part of "modern" "Japanese" ideas of how to be a proper modern woman, and a good wife and mother. Even as synthetic dyes, machine-spun yarn, and new types of looms came to dominate, Okinawan textiles nevertheless became a luxury export good, purchased by Japanese on the mainland as an exotic and special good while Okinawans found it cheaper to buy Japanese material for their clothing; by the 1920s or '30s, some 80-90% of textiles produced in Okinawa prefecture were exported.[16]

While kasuri and other materials began to be produced commercially, however, bashôfu continues to be made only by hand. Banana fiber thread and cloth cannot be effectively produced by machine; even the use of a basic tabletop sewing machine tears through the material, ruining it.[17]