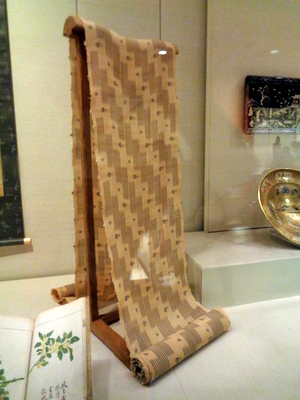 An example of baasaa cloth, on display at the British Museum

Bashôfu, or baasaa in Okinawan, is cloth made from the fibers of a particular type of banana plant. Garments made in this fashion, known in Okinawan as baasaa jin and in Amami langage as bashagin, were among the more common types worn traditionally by both elites and lower classes in many parts of the Ryukyu archipelago.[1] The ito bashô, or "thread banana" plant, as it is called, is different from the type which produces edible fruit, and while the plant is not originally indigenous to the Ryukyus, and even today grows only in areas of human habitation, bashôfu cloth is nevertheless unique to Ryukyuan culture; it is not produced or used in other cultures, e.g. in Southeast Asia. Today, the chief center of baasaa cloth production in Okinawa is the neighborhood of Kijoka in the northern Okinawa (Yanbaru) village of Ôgimi.

The cloth is made from fibers taken from the center of the main stalk of the plant; fibers closer to the core of the stalk are softer and finer, and are used for the finest baasaa cloth, while the rougher outer fibers are used for weaving mats and the like. It is often said that because of the nature of the material, banana fibers cannot be easily woven or sewn by machine, and that all bashôfu production is therefore still done today by hand.[2] However, in the Amami Islands, at least, looms were traditionally used for weaving the threads.[1] The process of spinning the plant fibers into thread is known in the Amami Islands as wowomi; first the fibers are boiled, and then separated using bamboo scissors called iebi. Unusable elements are removed, and what remains is bleached by being left under running water overnight. The fibers are then dried, separated one by one, and spun into thread. Traditionally, this was done by many women in their homes.[3]

A somewhat coarse fabric, bashôfu is nevertheless used in the Ryukyus for a wide variety of purposes, from robes to underwear, and was worn by people of all social classes, including even royalty.

The earliest extant mention of bashôfu is in a 1546 account written by Koreans shipwrecked in the Ryukyus, who also describe how it is made - a process that has remained largely unchanged, at least in certain parts of the Ryukyus, among certain lineages of weavers, down to the present day. The banana fabric is not mentioned as a tribute good, however, until over forty years later, in 1587. In the early modern period, the Ryukyu Kingdom regularly presented bashôfu as tribute or gifts of luxurious "local products" to the lords of Kagoshima domain and to the Tokugawa shoguns; the people of the Amami Islands also often presented Kagoshima domain with bashôfu cloth, sometimes being permitted to do so in place of gifts or payments of sugar.[1]

The material is central enough to Okinawan culture that a song called "Bashôfu" is among the most well-known and popular folk songs today. Taira Toshiko, a weaver who collaborated with Yanagi Sôetsu in the 1930s and was named a Living National Treasure in 2000, is the most prominent producer of bashôfu today, at her workshop in Kijoka. Ishigaki Akiko is another notable bashôfu weaver active today, though she has not received the same national and international attention as Taira.[2]

Though bashôfu was traditionally something available to all classes of people, since it cannot be woven or sewn by machine, it is an exceptionally expensive material today. A roll of bashôfu material can be worth tens of thousands of dollars.[4]