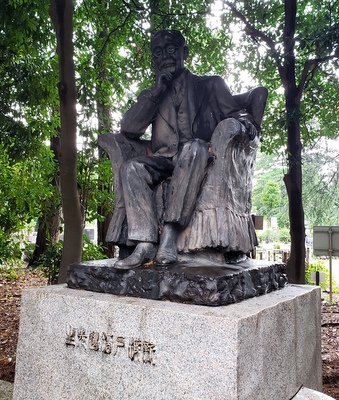 Statue of Nitobe at Tama Cemetery in Tokyo

Nitobe Inazô was a Meiji period writer, perhaps best known for his book Bushido: the Soul of Japan, which remains one of the chief sources for much of the modern misconceptions about the samurai. Nitobe was also an avid writer on colonization and colonialism, particularly on Japanese colonial rule in Taiwan. He was known as a devout Christian.[1]

Bushidô was published in 1900, first in English, before it was ever published in Japanese or in other languages. The text argued for the existence of bushidô as a Japanese counterpart to the noble European tradition of chivalry, as part of a broader complex of Meiji period cultural efforts to place Japanese history, Japanese culture, Japanese traditions, on an equal level with the "great" traditions of the West. In writing the book, Nitobe drew extensively on the Edo period works of Miyamoto Musashi, Yamamoto Tsunemoto, and others, but nevertheless is said to have believed he was himself first coining the term "bushidô" - a point often cited in arguments for bushidô as an "invented tradition," and against bushidô as a system of warrior values authentically, genuinely, dating back to the medieval era.

In 1908, Nitobe was named the first chair of colonial studies at the University of Tokyo. A series of lectures he gave on the subject in 1916-1917 have been described as having "constituted the first systematic study of the subject in Japan."[2] His views on the subject included the idea that "lesser" "inferior" races could be uplifted, civilized, through assimilation into the "superior" culture - that is, Japanese culture, values, attitudes - but only gradually over a very long period of time, and relative to the degree of cultural difference between the two to begin with. Thus, he advocated that Koreans might be able to be assimilated relatively quickly, but that it could take as long as 800 years of colonial rule for the Taiwanese to be guided into becoming fully civilized, modern, people.[3]

He later worked at the League of Nations; his student Yanaihara Tadao took his place as chair of colonial studies at the University of Tokyo in 1937.[1]