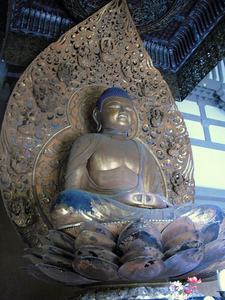 The Amida Buddha statue at the Byodo-in Temple in Hawaii, a replica of that at the Byôdô-in in Uji.

The Kamakura Daibutsu, a depiction of Amida.

The Buddha Amida (Skt: Amitabha) is the Buddha of the Western Paradise, worshipped as the chief deity of Jôdo-shû, or "Pure Land" Buddhism. Widely worshipped in Japan, Amida is also the most-worshipped incarnation of the Buddha in China.[1]

Amida, the Buddha of Boundless Light, is said to have many ages ago taken a vow, known as the Original Vow, to compassionately offer salvation to any who meditated upon his name "with single-minded and wholehearted devotion,"[2] rescuing their soul to the Pure Land, also known as the Western Paradise. While meditation on the name of Amida was originally a somewhat more complex and esoteric process, in late Heian period Japan, it evolved into being a simpler repetition of the name, a recitation known as Nenbutsu (念仏). Among late Heian period aristocrats, it also became popular to have paintings of Amida near one's sickbed, and even to hold onto golden threads linking one to the painting, so that as one died, one's soul could be pulled by Amida, by those threads, directly into the Pure Land. Fujiwara no Michinaga, who died at the Amida Hall at Hôjô-ji in 1027, is said to have passed away in this manner.[3]

Pure Land Buddhism first became prominent in the late Heian period, becoming more popularly established in the provinces in the Kamakura period. It was popular for the strong appeal of the Pure Land itself, as well as for the relative ease with which salvation could be attained; for poor, illiterate commoners, as well as for aristocrats who enjoyed their lavish lifestyles, a monastic lifestyle was for many unattainable or even unimaginable. Pure Land Buddhism allowed that one did not need to learn complicated esoteric knowledge or rituals, and did not need to rid oneself of all material possessions and pleasures, but rather that one merely needed to have faith. In this it was also a much more egalitarian religion, open to all, and offering equal salvation to all, regardless of class or rank. Even women were offered salvation in Pure Land Buddhism, where they were not in the Tendai and Shingon sects. Some taught, too, that as they entered the age of the decline of the Law, the age known as mappô, other practices would become less effective, and only the great power of Amida could still be relied upon as an avenue to salvation.

While the teachings of the Heian period figures such as Ippen, Ryônin, Kûya, and Genshin emphasized Amida, however, it was not until the time of Hônen, at the very end of the Heian period, that Pure Land Buddhism can be said to have formed into a sect of its own, decidedly separated from other sects of Buddhism, emphasizing the importance of the nenbutsu alone. Where previously teachings had regarded a certain deep esoteric knowledge as an essential part of chanting the nenbutsu, the words themselves being merely one aspect of a much deeper, more complex, spiritual practice, Hônen insisted upon the words alone, as a show of faith.[4]

Some of the most famous Heian period Buddhist temples are dedicated to Amida, or feature images of Amida as the main object of worship. These include the Byôdô-in in Uji, and Zenrin-ji and Chion-ji in Kyoto, as well as Chûson-ji in Hiraizumi.

Paintings of Amida often depict the deity coming down from the heavens to receive a worshipper, and escort them into paradise. Such images are called raigô (来迎, lit. "coming and welcoming") images. Amida also often appears in the crown of sculptures or paintings of the bodhisattva Kannon, with whom Amida is associated.