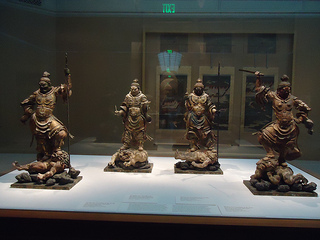 The Shitennô, lit. "Four Heaven Kings," are a group of Buddhist figures who serve as symbolic guardians of the four directions. They originated as folk religion figures in Central Asia, before being incorporated into the Chinese Buddhist pantheon, and as such take the form of armored horse-riding warriors. The Four Heaven Kings were particularly revered by the imperial court in the earliest centuries of Japanese Buddhism, as gurdians of the State.[1]

The term Shitennô has also been used historically to refer to certain figures' most trusted four generals, or to group and elevate other figures. Some examples include: