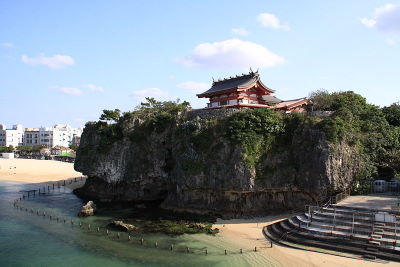 Naminoue Shrine, located high above the waves looking out over the South China Sea.

Naminoue-gû, literally "Above the Waves Shrine", is a Shinto shrine in Naha, Okinawa, the primary shrine (一の宮, ichinomiya) in the prefecture and one of the Ryûkyû Eight Shrines. It sits atop a high bluff, overlooking Naminoue Beach and the ocean.

Originally a sacred space of the native Ryukyuan religion, due to its location and natural beauty, it was dedicated to nirai kanai, the mythical source of all life, and to the sea. At some point it came to be known as Hana gusuku and Nanminsan[1], and later was incorporated into the Japanese system of Shinto shrines.

According to legend, it was founded after a fisherman, who had come to that spot to fish everyday, caught a mysterious stone. He began to pray to it, and began to receive better hauls in his fishing; the stone glowed, and the man treasured it. However, the gods (kami) stole the stone, and the man fled. From then on, there was an oracle at that spot, until the time when it became known as Nanminsan. Other stories tell that the man was visited by an avatar of Kumano, who commanded the spiritual protection of the nation, and that, the man having related such to the royal government, the shrine was erected.

According to the historical document Ryûkyû-koku yûrai-ki (琉球国由来記, "Record of the Origin of the Kingdom of Ryûkyû), a Buddhist temple was founded on the site, to be associated with the shrine, in 1367, by Raijû, a monk from Japan's Satsuma province. This was called Naminoue-san Gokoku-ji (波上山護国寺, "Temple for the Protection of the Country, Naminoue Mountain").

Another Buddhist monk, Nisshû Shônin, is said to have himself, in 1522, carved three sculptures - one of Amida, one of Thousand-Armed Kannon, and one of Yakushi - and placed them in three halls at Naminoue. These statues were later moved to the Gokoku-ji, and so escaped harm when the main hall of the Naminoue temple burned down in 1633/6, when Raiyû Oshô was chief priest there. Two years later, Raikei Oshô of Kôôji, who had been sent to Japan by King Shô Hô to obtain three Buddhist sculptures, returned and rebuilt the temple.[2]

The shrine then came to be associated with protection of the many ships coming and going from Naha's port, as Okinawa's trade with Korea, China, Japan, and regions to the south expanded. Prayers were made for safe journeys, and kami of the sea, of navigation and related matters were enshrined there. In addition, at the beginning of each year, the King visited the shrine and formally prayed on behalf of all the nation for good harvests and good fishing, and for the peace and prosperity of the nation. Thus, Naminoue came to be the top shrine of the kingdom. It was officially recorded as such in 1605, in Ryûkyû Shintô-ki (A Record of Ryûkyû Shinto) by the Japanese Buddhist monk Taichû Shônin.

Following the Meiji Restoration, the Kingdom of Ryûkyû was dissolved and formally annexed by Japan as Okinawa Prefecture. The shrine was formally established as a Shinto shrine under the Imperial Household Agency on 1890/1/20[2], and designated as the shrine for the protection of the tranquility of all Okinawa (沖縄総鎮守社, Okinawa sôchinshu sha). In 1924, it was officially designated the center of religious affairs on the island. Symbols of Minamoto no Tametomo, and Ryukyuan kings Shunten, Shô En, Shô Nei, and Shô Tai were enshrined there as the primary objects of worship, as part of efforts to integrate the Ryukyuan royal line into the Japanese system of nobility and Imperial authority[3].

During the Sino-Japanese War (1894-5) and Russo-Japanese War (1904-5), it was common for women to come to Naminoue to pray that their sons be deemed unfit for military service to the Japanese Empire[4].

The shrine was rebuilt in 1923 to better match Japanese Shinto shrine architectural styles, and so, today, the unique or distinctive Ryukyuan elements of the shrine's architecture have been lost.

The shrine was destroyed in the 1945 battle of Okinawa; the honden (main hall) and shrine office were rebuilt in 1953, as was the worship hall (haiden), eight years later. Construction of a number of other buildings, including a number of smaller shrines within the grounds, was completed in 1993.

The shrine contained for many years a temple bell cast in Korea in 956. The bell was designated a National Treasure in 1907, but was destroyed in the 1945 Battle of Okinawa. Only the dragon-shaped head of the bell (the loop from which it would be hung) survived; this today resides at the Okinawa Prefectural Museum. No other examples of Goryeo bells survive in Okinawa.[5]

According to the Nantô fudoki, the bell was 2 shaku, 7 sun, 1 bu (roughly 80 cm) tall, and roughly 1 shaku, 8 sun, 8 bu in diameter (about 55 cm). It had a rather typical form overall, but is said to have been decorated with apsaras and bodhisattvas, a rare feature. The Nantô fudoki records the full inscription on the bell, and its author, Higaonna Kanjun, writes that the bell was cast in 956, and was at one time the oldest bell in Goryeo. The bell originally hung in a temple in Korea; how it came to be in Okinawa and at Naminoue remain unclear,[6] but some have suggested it may have been plundered from the Korean temple by wakô who then brought it to Ryûkyû.[7]