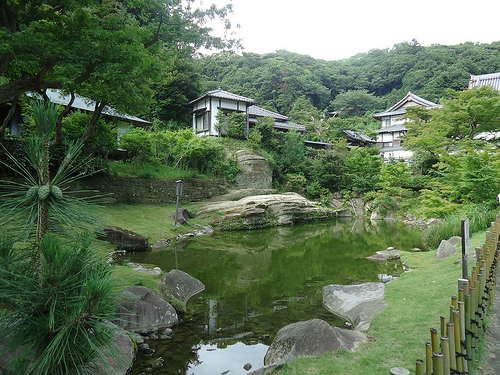 One of the gardens at Engaku-ji, designed by Musô Soseki, and designated a Place of Scenic Beauty (meishô)

Musô Soseki was a Zen priest known for having founded a number of temples in Kamakura, and as a designer of temple gardens. He was named kokushi ("national teacher") by seven emperors, and has been described as "probably the most famous monk of his time."[1]

When he was first offered the position of abbot of a Zen monastery in Kamakura by the Hôjô clan, he initially refused, instead accepting an offer from Emperor Go-Daigo to become the abbot of a temple in Kyoto, in 1325. He resigned the following year, however, traveling to Kamakura and taking up a position as an abbot at that time. As head of Jôchiji, he founded Zuisen-in, now known as Zuisen-ji. After becoming the head of Engakuji, in conjunction with the 1333 fall of Kamakura, he returned to Kyoto, founding Saihô-ji, Shôkoku-ji[2], and other temples in the Kyoto area, designing the gardens at Zuisenji and Saihôji as well.

Following Go-Daigo's fall and the establishment of the Ashikaga shogunate in 1336, Soseki then gained the patronage of Ashikaga Takauji, who in 1339 had him establish Tenryû-ji in Go-Daigo's memory.