From SamuraiWiki
(Redirected from Engakuji)
Jump to navigationJump to search

For the temple in Okinawa, see Engaku-ji (Okinawa). 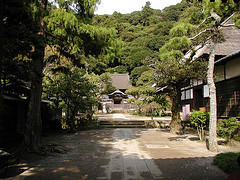 One section of the Engaku-ji complex, the shariden in the distance.

Engakuji is a Rinzai Zen temple in Kamakura, ranked second among the Kamakura Gosan. It was founded in 1282 by Ch'an priest Mugaku Sogen upon the request of Shikken Hôjô Tokimune, who sought to expand the presence of Zen, the sect to which he devoted himself, and in order to serve as a temple dedicated to the spirits of those killed, on both sides, in the failed Mongol invasions.

The shariden, formerly the butsuden of the Taihei-ji nunnery, represents the oldest example in Japan of multi-storied, three-bayed, irimoya Chinese-style architecture, and is considered a National Treasure, as are the supposed relics of the Buddha contained within, and the temple's bell. The relics are said to have been obtained from Neng Yan Temple in China by Shogun Minamoto no Sanetomo. In addition, the temple's sanmon (main gate, rebuilt 1785), butsuden (Buddha Hall, rebuilt 1964), and hôjô are said to be model examples of Zen architecture. A pond associated with the hôjô, called Myôkôchi, and containing a famous stone said to resemble the shape of a tiger's head, appears in maps of the temple compound as early as 1335. It is today maintained in a form evidenced by Edo period maps of the compound.[1]

The temple's main Buddha Hall, rebuilt in 1964, contains an image of a Jewelled-Crowned Shaka. The dragon painting on the ceiling was produced by Maeda Seison, one of the founders of Nihonga, along with his student Moriya Tadashi. To the west of the Buddha Hall is located a zazen meditation hall, in accordance with the traditional shichi-dô-garan layout of Zen temples. Known as the senbutsujo, it contains a sculpture of Yakushi nyorai, sculpted in the style of Unkei and dated to the Nanboku-chô period.[1]

The temple remains today one of the larger Zen compounds in Kamakura, containing 19 tatchû (sub-temples); at its peak, the tatchû numbered 42. The entirety of the compound, including an area of forest known as Kojirin, serves as spaces for meditation and for shûgyô (ascetic training).[1]

One of the first subtemples to be constructed in the compound, called Butsunichian (仏日庵), was built to serve as Tokimune's mausoleum. His son Hôjô Sadatoki and grandson Hôjô Takatoki later came to be buried there as well. It was renovated in 1811.

Another tatchû, the Ôbaiin, was founded by Tokimune's wife, Kakuzan-ni, as a site for holding his memorial service. The site would later become closely associated with the Ashikaga clan; some of Ashikaga Yoshiakira's ashes are said to be held there. A tower on the site known as Kekon-tô was built by the Ashikaga as a tôsho for Musô Kokushi.[1]

The Seizokuin was built in 1286 as the tomb of Mugaku Sogen, the temple's founder, who died on 1286/5/3 at Kenchô-ji, to which he had returned after establishing Engaku-ji.

The shogunal and Imperial patronage enjoyed by the temple in the Kamakura period declined in the Muromachi and Edo periods, though the temple continued to survive. It suffered damage by fire on a number of occasions, though Seisetsu Shûcho (Daiyû-kokushi) oversaw a major reconstruction effort in the Tenmei era (1781-89).