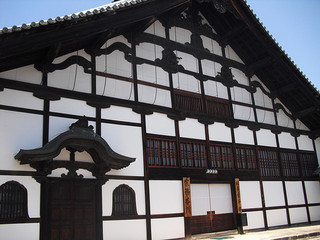 Shôkoku-ji is one of the five leading Rinzai Zen temples in Kyoto, and has 13 sub-temples (tatchû) on the grounds. Established by Ashikaga Yoshimitsu in the late 14th century, it is closely related to the Gold and Silver Pavilions (Kinkaku-ji and Ginkaku-ji), and has 130 sub-temples around the country.

Shogun Ashikaga Yoshimitsu practiced zazen (seated meditation), and considered taking the tonsure later in life; in 1382, he attended a ceremony led by Musô Soseki, and spoke to figures such as Shun'oku Myôha and Gidô Shûshin about establishing a temple. At their suggestion, he named it Jôten Shôkokuji, after a Chinese temple with the same name. The temple was constructed over the period of 1382-1392, and burned down completely two years later.

Rebuilding began almost immediately, and construction began as well in 1399 on a seven-tiered 110-meter pagoda which upon completion was the tallest in Japan. This was destroyed by lightning shortly afterwards, however.[1] After some further unfortunate incidents with lightning striking and destroying other newly rebuilt structures, the temple once again resembled its original form by 1407. Another effort to build a pagoda was begun, but this was destroyed by lightning as well, in 1470.[1]

The temple was destroyed and rebuilt numerous times afterwards, but the Great Dharma Hall (法堂, hattô) remains today treasured as the oldest extant example in Japan of a particular Muromachi period Zen style of architecture. The foundations of some buildings never rebuilt are visible just outside the lotus pond.

The temple's belltower was rebuilt in 1844. The sutra storehouse (kyôzô), most recently rebuilt in 1859-1860, houses among other treasures a complete Korean copy of the Tripitaka. The grounds also include a memorial mound where the hair of Emperor Go-Mizunoo was buried after he took the tonsure. The tower that once stood in connection with this mound burned down in the Great Tenmei Fire of 1788, but the burial mound, and a stone marker identifying it, remain.

A bathhouse on the grounds, known as Senmyô, is believed to have been built around 1400; the current structure dates to a rebuilding in 1596. The bathhouse takes its name from a reference to a sutra which features a story of 16 bodhisattvas bathing together; the word senmyô references specifically the words spoken by one of the figures in the story at the moment he reaches enlightenment. The bathhouse appears in at least one famous emaki (scroll painting), the Daitô gozan shodô-zu (大唐五山諸堂図, Images of Various Halls of the Great Five Chinese [read: Zen] Temples).

Shôkoku-ji was the home to a number of major Japanese artists over the centuries, including the Muromachi period Zen ink painters Shûbun, Sesshû, and Jôsetsu, and the Edo period Eccentric Itô Jakuchû. The temple's collection thus includes many extremely famous works by these artists, some of which are on display, at least in reproduction, at the temple's Jôtenkaku Art Museum (承天閣美術館).