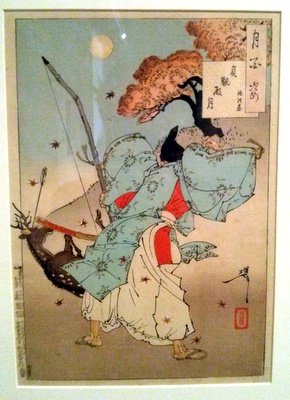 Tsunemoto in an 1887 ukiyo-e print by Tsukioka Yoshitoshi.

Minamoto no Tsunemoto was a Heian period Minamoto clan samurai elite. A son of Minamoto Sadazumi, sixth son of Emperor Seiwa, he is considered the progenitor or founder of the Seiwa Genji, the branch of the Minamoto clan to which Minamoto no Yoritomo, Minamoto no Yoshitsune, and various other prominent late 12th century figures belonged, and from which the Ashikaga and Tokugawa shoguns claimed descent.[1]

Tsunemoto is known for his role in defeating Fujiwara no Sumitomo. He is also known for a legendary story in which a supernatural being in the form of a deer attacked the emperor at the Jôganden hall within the Kyoto Imperial Palace; Tsunemoto dispatched the being with a single arrow, stopping it before it reached the emperor.[2]