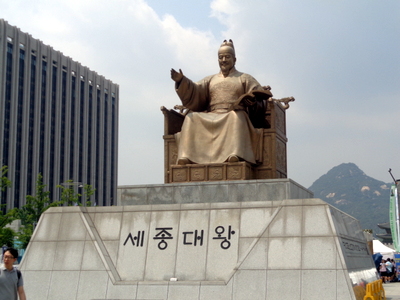 King Sejong was an early king of Joseon Dynasty Korea, ruling from 1418 until his death in 1450. He is credited with inventing the hangul writing system, and with numerous other innovations, and is revered in South Korea as a national hero.

Sejong was born in Hanyang (Seoul), on 1397/4/10. He was the third son of a royal prince and princess who later took the throne as King Taejong and Queen Wongyeong. He ascended to the throne himself at age 22, in 1418.

Hangul is traditionally considered to have been introduced in 1443. Sejong oversaw the publication of Hunminjeongeum, a book explaining the new writing system, in 1446. Around the same time, he also oversaw the production of the first novel in hangull, Yongbi Eocheonga (Songs of Flying Dragons); as well as a book on celestial calculations; and oversaw the improvement of the kingdom's weaponry, including especially various forms of cannon, firearms, and artillery.

Sejong's queen was Queen Soheon. He was succeeded by one of his sons, who took the throne as King Munjong. Sejong had 13 other sons, and four daughters.