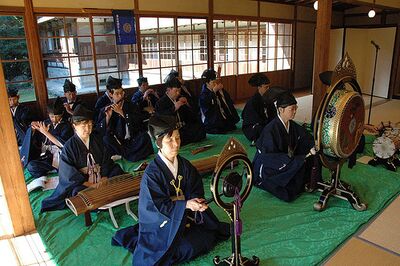 A gagaku performance at the Sankeien in Yokohama

Gagaku (lit. "elegant music") is the classical court music of the Japanese Imperial court. It derives significantly from continental court music, and was adopted by the Japanese court as the official genre or style of court music in 701. It incorporates elements not only from the highly formal yǎyuè[1] ritual music of the Tang dynasty court, but also from Tang banquet or entertainment music (燕楽, yànyuè), and from Korean court music.[2]

Gagaku is divided into two sub-categories, representing the two main threads of continental influence. Musical elements derived from Chinese influence are known as Tôgaku (Tang music) and those from Korean influence komagaku (Goguryeo, i.e. Korean music); though these two sub-categories are traditionally regarded as "Chinese" and "Korean" in origin, scholars today have noted notable South Asian influences within Tôgaku as well, and Manchurian elements within komagaku, reflections of how complex and multicultural the Tang and Koryo polities themselves were.[3] A third sub-category, known as kuniburi no utamai (国風歌舞), encompasses kagura music and dance and other forms of folk religious music often associated with local/regional Shinto festivals, but also with certain ancient rites of the imperial court. Some Heian period "folk music" (fûzokuuta) has also been classicized and incorporated into the gagaku canon.[3]

With the influence and incorporation of native Japanese elements, gagaku is said to have developed into its mature form in the 10th century. Though it is unclear if Chinese yǎyuè maintained its ritual associations in Japan, in China this music had profoundly significant ritual meaning; distinct from music played for entertainment at court banquets, yǎyuè was performed as part of the ceremonies of an Emperor's ritual sacrifices to Heaven, or to the Imperial ancestors, and had to be performed in precisely correct tones, as a part of maintaining the proper cosmic order. Confucian court advisors worked hard to maintain the court's instruments in the correct tuning, and at various times in history debated as to the correct tones.[4]

Instruments used in gagaku include the biwa (a stringed lute), a variety of flutes including the shô, ryûteki, hichiriki, and komabue, and a variety of drums, including the kakko and tsuridaiko, as well as bells, gongs, and occasionally koto. Performances are often accompanied by masked & costumed dances.

Gagaku as performed by musicians of the Imperial Household Agency was named an Intangible Important Cultural Property in 1955, and in 2009 was named an important Intangible Cultural Heritage by UNESCO.