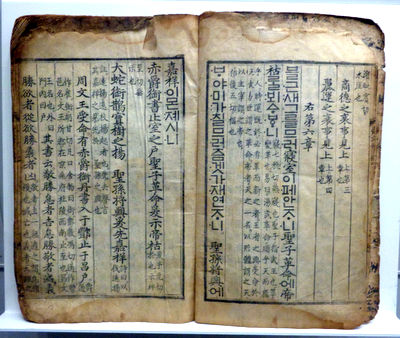 A copy of Yongbi Eocheongga on display at the National Museum of Korea.

Hangul was first developed in 1443, but Hunminjeongeum, a book organized by King Sejong which formally describes and explains the writing system, went through three years of further testing and improvements before being published three years later. Many scholar-officials in the court expressed strong opposition to this shift, citing Neo-Confucian principles, and concerns about the impact on relations with China. Nevertheless, their opposition was eventually overruled. Meanwhile, in 1445, Sejong released an epic entitled "Songs of Flying Dragons" (K: Yongbi Eocheonga), which describes the founding of the Joseon Dynasty in five books (ten volumes, 125 chapters), in both hangul and hanja.

A dictionary called Dongguk Jeongun, published in 1448, was the first book to detail Korean pronunciations, in hangul, for Chinese words.