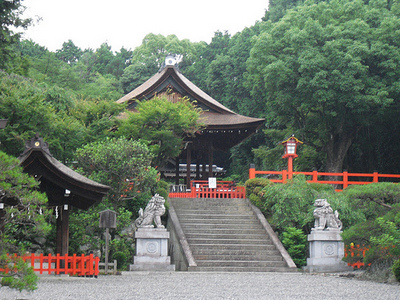 Kenkun Shrine, also known as Takeisao Shrine, is a Shinto shrine on Funaoka-yama in Kyoto, dedicated to the spirit of Oda Nobunaga. His kamon (clan crest) appears in numerous places around the shrine grounds.

The shrine was established by Emperor Meiji in 1869, who at that time declared Nobunaga a kami under the name Kenkun or Takeisao, asserting that by reuniting and pacifying the realm after a century of civil war, Nobunaga had been doing a service to the Imperial state.[1] The shrine was moved to its current site atop the hill in 1875, and was officially completed in 1880, alongside two shrines dedicated to Toyotomi Hideyoshi, in Kyoto and Osaka.[1] Funaoka-yama had served as the marker for North in classical Heian-kyô, and following the Honnôji Incident of 1582, Toyotomi Hideyoshi, with the permission of Emperor Ôgimachi, established Funaoka as a gravesite for Nobunaga.

The shrine holds a number of treasures in its collection related to Nobunaga, including one of Nobunaga's suits of armor, a sword used by Imagawa Yoshimoto at the battle of Okehazama, and an autographed manuscript copy of Ôta Gyûichi's biography of Nobunaga.

The Funaoka Festival, celebrated each year on October 19, marks the anniversary of Nobunaga's 1568 entry into the city.