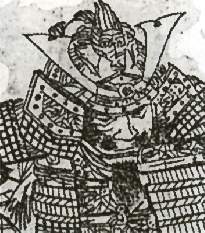 Imagawa Yoshimoto was the 9th lord of the of Suruga Imagawa family and daimyô of Suruga, Tôtomi and, later, Mikawa Provinces until 1560.

Yoshimoto was the 5th son of Imagawa Kazusa no suke Ujichika (1473-1526). His mother was a daughter of Nakamikado Nobutane. As a youth he was sent to the Zentoku-ji [善徳寺] to prepare for a religious life and was named Baigakushôhô [梅岳承芳]. In 1526 Ujichika died and his eldest son Ujiteru succeeded him. Ujiteru himself died of illness in 1536 and this touched off a struggle for power between his remaining brothers. Yoshimoto quit the temple and entered the fray, which became known as the Hanagura no ran. Yoshimoto, aided by Taigen Sessai and supported from afar by Takeda Nobutora of Kai Province emerged the victor with the aid of Hojo Ujitsuna, and moved to consolidate his power with a marriage to Takeda Nobutora's sister in 1537. He also acted as an go-between for the arranged marriage of Nobutora's eldest son, Harunobu to the daughter of court noble Sanjo Kimiyori. To this time, the Imagawa and neighboring Hôjô had been allied, with both at odds with the Takeda. Yoshimoto's rise to power and subsequent alliance with the Takeda offended Hôjô Ujitsuna and a period of hostilities between the Imagawa and Hôjô commenced. Concerned by the proximity of Kai to his own domain, Yoshimoto sought to influence the Takeda and was apparently involved in Takeda Shingen's take-over in 1540. Relations between the Takeda and Imagawa would remain stable for the remainder of Yoshimoto's life. In 1544 the Imagawa and Hôjô faced each other at the Kitsunebashi, with the Takeda moving their own army into the area in support of Yoshimoto. At this time, all three major powers in the region-the Takeda, Hôjô, and Imagawa-had pressing concerns elsewhere. The Takeda were involved in a war with the Murakami family for control of central Shinano province, the Hôjô were threatened by a powerful alliance of the two branches of the Uesugi, and Yoshimoto's western holdings were being raided by Oda Nobuhide of Owari province. Shingen suggested a truce be arranged and after In truth, Yoshimoto emerged the winner from negotiations, as the Hôjô were compelled to return the lands they had seized from the Imagawa in Suruga over the course of the last few years. Moreover, he was free to focus his full attention to the west. Yoshimoto was clearly respected by his peers, and was often in the position of mediator, such as when Hôjô Ujiyasu requested he ask Takeda Shingen not to attack Kozuke as the Hôjô were preparing to do so.

Yoshimoto relied heavily on the talents of the monkish warrior Taigen Sessai, making use of him in negotiations with the Takeda and Hôjô and as his primary army commander. His martial skills were most required in Mikawa Province, where the Imagawa and Oda were contending for power. The native Matsudaira family had become weakened by family disputes and the murder of their lord, Kiyoyasu, in 1536. Their neighbor to the west, Oda Nobuhide, was an aggressive commander and took advantage of the fractured state of the Matsudaira to make in-roads in Mikawa. In 1540, the lord of the Matsudaira, Hirotada was only 14 years old and came under the influence of the Imagawa by sheer necessity. In 1540 Nobuhide brought down Anshôji Castle [安祥寺城; usually referred to in English as Anjô] and established his eldest son Nobuhiro there. According to tradition, an Imagawa army sent to expel the Oda from Mikawa was defeated at the 1st Battle of Azukizaka {小豆坂の戦い) in 1542 but there is some question whether or not this engagement actually occured. In 1548 Nobuhide led 4,000 men against the Matsudaira's Okazaki Castle, prompting Yoshimoto to dispatch Sessai with a relief army. Yoshimoto used this situation as a means of tightening his control over the Matsudaira by making his help dependant on Hirotada sending his son, the future Tokugawa Ieyasu, as a hostage to Suruga, a price Hirotada had little choice but to accept. The resulting clash, the so-called 2nd Battle of Azukizaka ended with an Imagawa victory. Sessai pressed his advantage to put Anshôji Castle under siege. Oda Nobuhiro was forced to surrender and would later be returned to the Oda in return for Hirotada's aforementioned son, who had in fact been intercepted on his way to Suruga and ended up in Nobuhide's custody. In 1549 Hirotada died, leaving the Matsudaira effectively leaderless and with Yoshimoto's influence over Mikawa all but complete. The death of Oda Nobuhide two years later was a further boon for Yoshimoto's westward ambitions.

Yoshimoto's wife, the daughter of Takeda Nobutora, died in 1550 and thus the relationship between the Takeda and Hôjô became more tenuous. In 1552 he strengthened this bond by marrying his daughter to Takeda Shingen's son and heir, Yoshinobu. Two years later he married his own heir, Ujizane, to a daughter of Hôjô Ujiyasu. In 1553 Shingen had married a daughter of his own to Ujiyasu's heir, Ujimasa and so, by 1554, all three of these powerful clans enjoyed maritial relations.

While Sessai led his armies, Yoshimoto carried out a series of land surveys in his domain and transformed his capital of Sumpu into a cultural center. Yoshimoto himself was said to have had the habit of shaving his eyebrows and blackening his teeth in the manner of a Kyoto noble. He composed the Imagawa kana mokuroku tsuika, expanding on house rules left by Ujichika, in 1553, established a printing press in Sumpu and oversaw the completion of a five-volume history of the Imagawa family. 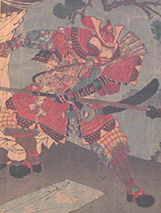 Print of Imagawa Yoshimoto at the battle of Okehazama, by Nobukazu

By the close of the 1550's, Yoshimoto enjoyed a strong position and began to consider marching on Kyoto. Sessai had died in 1557, but the Imagawa had been able to call on the talents of the young Matsudaira Motoyasu (Tokugawa Ieyasu) to check the activities of Oda Nobunaga, and by 1560 Yoshimoto felt confident enough to call his entire army to arms. He mustered somewhere between 15,000 and 20,000 men from Suruga and Mikawa and in June 1560 departed for Owari. The common view is that he intended to march on Kyoto. Another theory is that the purpose of his campaign was in fact specifically to force Nobunaga's submission.

Two of Oda's forts (Marume and Terabe) were reduced, and a confident Yoshimoto called for his men to rest in the Dengakuhazama (near Okehazama) where he viewed the heads taken thus far and enjoyed a musical performance. Unbeknownst to the Imagawa, Oda Nobunaga had resolved to take the offensive, and had managed to creep right up on Yoshimoto's encampment. Following a terrific thunderstorm, Oda's men attacked, and such was the suddenness and violence of their charge Yoshimoto initially assumed a fight had broken out among his men. Amidst the growing confusion, Yoshimoto was set upon by a number of Oda warriors. He managed to cripple one with a blow of his sword, but was struck down by a certain Mori Shinsuke. When word of his death spread, the Imagawa army fled precipitously, signaling not only the end of Yoshimoto but also an eventual end to the Imagawa. Indeed, his successor Ujizane (1538-1614) would suffer the loss of his lands to the Tokugawa and Takeda by 1569, and in the end retired to Kyoto, providing a certain element of irony to the demise of the once-proud Imagawa clan.