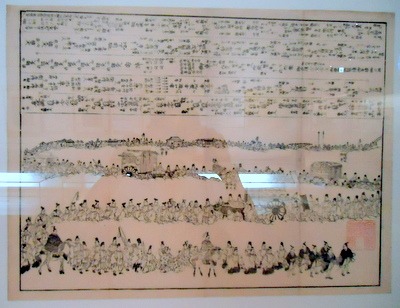 A kawaraban print from 1861 depicting the wedding procession of Kazu-no-miya, and describing (in the text above) the composition of the procession. National Museum of Japanese History

Kawaraban ("tile prints"), also known as yomiuri ("sell & read"), were a cheap type of woodblock print popularly circulated in the Edo period which informed as to recent events. Though the ukiyo-e woodblock prints more widely known today were themselves relatively inexpensive ephemera, kawaraban were even cheaper, being printed on much thinner paper, often only in monochrome, and using blocks cut by less than expert craftsmen. Often compared to European broadsheets, and sometimes regarded as an early precursor to the newspaper, kawaraban related chiefly exciting local events, often in an over-dramatized fashion. Scholars note that kawaraban were meant more to interest and entertain - and to sell, and thereby make a profit - than to inform or educate, and as such they cannot be taken as literally accurate to the events they describe; still, they serve as valuable sources for inferring what interested people, and if their understanding of current events was based on these broadsheets, inferring too how Edo commoners saw and understood their world.

The first kawaraban are believed to have been published in 1615. For the first two centuries of the Edo period, they chiefly reported on natural disasters, fires, and affairs concerning local individuals, such as love suicides and revenge stories. The latter often fed ichiyazuke ("pickled overnight") stage plays which dramatized the story further, and on occasion these developed into fuller plays which entered the traditional repertoire, recording for posterity dramatized versions of real events, again such as love affairs, murders, mothers seeking after their lost child, children seeking to avenge their father's death, and so forth. Kawaraban also often announced upcoming events of particular interest, such as Ryukyuan or Korean embassy processions, or on at least one occasion, in 1841, the shogun's journey to Nikkô Tôshogû.

In the 19th century, kawaraban began to report on political events. Edicts were issued attempting to restrict their content or ban them outright, but kawaraban continued to circulate unabated. When Commodore Perry and his "black ships" arrived in 1853 and again in 1854, townspeople were prevented from seeing the foreigners in person, but were able to learn something of the events from kawaraban publications. More than five hundred different prints related to the "black ships" appeared on the market at that time, each of them likely printed in print runs of as much as 2,000 copies. In content and style, some of these Bakumatsu period kawaraban begin to closely resemble political cartoons; one example of this is a print depicting Commodore Perry as a devil or demon, drawing upon standard Buddhist iconographies for such creatures.[1]

Due to their ephemeral nature and fragile materiality, the vast majority of kawaraban published do not survive. However, those that do provide a glimpse into another aspect entirely of Edo period society not necessarily represented in any other sources.