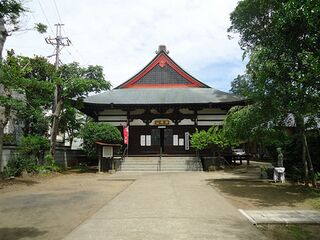 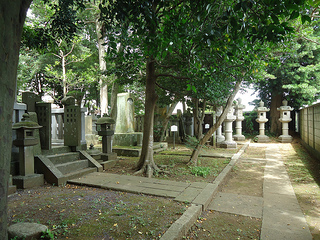 The Hotta clan graveyard at Jindai-ji

Jindai-ji is a Tendai temple in Sakura. It is the family temple (bodaiji) of the Hotta clan, lords of Sakura han, and is the site of the graves of the clan's heads. The temple also houses a shrine to Bishamonten, one of the Sakura Seven Lucky Gods.

The temple was originally established in 1615 in the castle town of Yamagata, by Jigen Daishi. A branch temple of Enryaku-ji, it was revived in 1701 with Yamagata han daimyô Hotta Masatora as the "founder." The temple was then moved to its current location in Sakura in 1746/8 by Hotta Masasuke, when the Hotta clan was moved from Yamagata to Sakura.

The chief object of worship is an eleven-headed Kannon which was originally a personal object of devotion of the final lord of Sakura, Hotta Masatomo. It was sculpted by a Sakura local, Tsuda Nobuo.

The former hondô (main hall) of the temple was destroyed in a fire in the early Meiji period; the current hall, originally built in 1726, was moved from Namegawa Ryûshô-in (elsewhere in Shimousa province) to Jindai-ji in 1961.