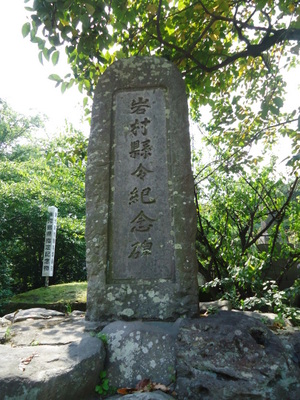 A monument to Iwamura in the Nanshû Cemetery in Kagoshima

Iwamura Michitoshi was a prominent statesman of the Meiji period, serving as governor of the prefectures of Saga, Kagoshima, Okinawa, and Hokkaido in the 1870s-1880s, and then briefly as Minister of Agriculture and Commerce in 1889 to 1890.

Iwamura was born in Tosa han, and served as an army officer in the Boshin War, before becoming governor of Saga prefecture. In 1877, as governor of Kagoshima prefecture, he played a prominent role in efforts to suppress the Satsuma Rebellion; when that rebellion came to an end with the battle of Shiroyama and the death of Saigô Takamori, Iwamura saw to it that Saigô and many of his men were given proper burials at the former site of the Buddhist temple of Jôkômyô-ji, thus marking the foundation of the Nanshû Cemetery.

Iwamura later served as head of the Board of Audits before becoming governor of Okinawa in 1883. Iwamura was critical of the reforms effected by his predecessor in Okinawa, Uesugi Mochinori, and supported a series of policies of "preserving old customs" (kyûkan onzon). Uesugi had put pressure on the yukatchu, the traditional aristocracy, accusing them of oppressing the peasantry, and causing many of them to flee to China. Iwamura reversed many of Uesugi's policies on this matter, seeing the yukatchu as experienced bureaucrats who could be valuable members of the prefectural administration. Iwamura saw that the higher-ranking yukatchu continued to receive stipends, and provided economic aid to lower-ranking yukatchu who had not traditionally been entitled to stipends; many who had fled to China returned to Okinawa as a result of Iwamura's policies.

He was succeeded as governor of Okinawa by Nishimura Sutezô after less than a year in the position. He then went on to serve as Governor of Hokkaido, and Minister of Agriculture & Commerce.