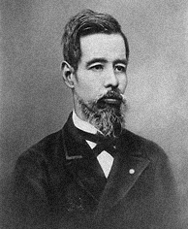 Munemitsu was born into a Samurai family in Wakayama in 1844. He joined the Kaientai near the end of the Bakumatsu Period, and he also attempted to assist Saigo Takamori during the Satsuma Rebellion and was imprisoned from 1878 until 1883. In 1886, Munemitsu received a diplomatic appointment after a trip to Europe. Munemitsu was active in the Japanese foreign ministry as a diplomat, and worked to reverse the Unequal Treaties imposed on Japan by the Western powers.