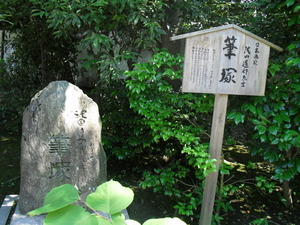 Ikeda Yôson was a Nihonga painter of the Meiji through late Shôwa eras, who devoted much time early in his career to yôga as well.

He was born Ikeda Shôichi in Okayama prefecture, but spent his early years moving frequently, living for short periods in Osaka, Fukuyama (Hiroshima prefecture), and Shanghai, as his father was a textile worker and his job required that they move frequently.

Shôichi began his formal artistic training in 1911, under yôga painter Matsubara Sangorô (1864-1946), who had in turn studied under Goseda Hôryû (1827-1892). He quit shortly afterwards, however, unable to bear the intense environment at the studio dormitory, and continued his studies from home. It is unclear at what point in his career he took on the name Yôson. He had his first solo exhibition in 1913, when he was 18, in Fukuyama where he and his family were living at the time, and had a piece accepted to the Bunten the following year, but enlisted in the army a month later.

Discharged in 1916, after two years in the military, he began studying Nihonga on his own, and after being rejected by the Bunten in 1918, sought out formal training under Takeuchi Seihô. He joined the Kokuga Sôsaku Kyôkai (Association for Creative National Painting), whose members included Tsuchida Bakusen and Ono Chikkyô, showed works in the Teiten in 1920 and 1921, and then entered the Kyoto City Special School of Painting.

For a brief time, he embraced subjects of poverty and misery, inspired by Goya and Munch, and by the devastation of the 1923 Great Kantô Earthquake. But he returned to lighter themes soon afterwards, producing series of paintings depicting the Tôkaidô and the regions of Japan - an obvious nod to ukiyo-e themes - in the 1920s-30s. In the late 1930s, he gained an interest in the work of Tomita Keisen, and, it has been said, began to "refine his taste for the quiet beauty of nature."[1]

His late works have been described as fantastical, and reflective of the confusion and disorder of the defeated nation.