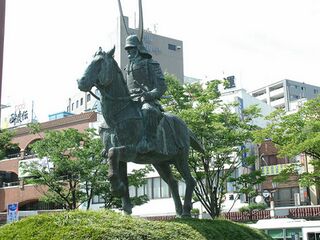 Bronze statue of Naomasa outside of Hikone Station

The Ii were originally from Tôtômi Province and claimed descent from the son of the sixth descendent of Fujiwara Fuyutsugu (775-826), Fujiwara Tomoyasu, who lived in the Ii Valley (Iinoya, 井伊谷). They supported the Southern Court during the Nambokucho Period, and subsequently lost much of their holdings and authority to the Imagawa clan. During the early Sengoku period they fought with the Imagawa in cooperation with Shiba Yoshisato but later became Imagawa vassals. After the Imagawa defeats by the Oda, however, they helped destroy the Imagawa and attempted to reclaim their prominence. The Ii became powerful under Tokugawa Ieyasu thanks to Ii Naomasa, one of the Ieyasu's four most famous generals.

The Ii remained politically important throughout the Edo Period, being named lords of the 350,000 koku[1] domain of Hikone han in 1601, and retaining control of that domain throughout the period. Members of the clan also held prominent positions in the shogunate government, often serving as rôjû, culminating with Tairô Ii Naosuke and his Ansei Purge and assassination in 1860 in front of the Sakuradamon gate of Edo castle. The Ii also enjoyed the unique privilege of conducting the "capping" portion of each shogun's genpuku ceremony, fitting the shogun with a formal eboshi court cap as part of his coming-of-age.[2]

Selected Members of the Ii Clan