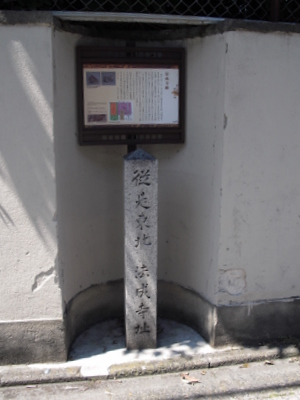 Stone marker at the former site of Hôjô-ji.

Hôjô-ji was a Buddhist temple founded by Fujiwara no Michinaga, who had taken the tonsure, with the intention that he would retire there. It was the first effort by the Fujiwara regency to create a great Buddhist structure, and though it was destroyed by fire in 1058, remained a model for temples for centuries to come.

Construction began in 1019, with many more buildings, including a Golden Hall, Five-Story Pagoda, Yakushi Hall, and Shaka Hall being completed the following year. The formal dedication ceremony, attended by Emperor Go-Ichijô and a great many courtiers and court ladies, was held on 1022/7/14[1].

Like many temples of the late Heian period, Hôjô-ji followed the layout and architectural style of an aristocratic shinden residence. The main image hall (kondô), lecture hall (kôdô), bell tower, sutra repository, and monks' residences were all located in the north of the compound; the rest of the structures were organized around a manmade pond with a small islet at the center, many of them connected with the kondô by covered corridors forming a full rectangle around the pond. Many of the sacred images (Buddhist sculptures) in the compound were sculpted by Jôchô.

Hôjô-ji is believed to have been the model for the Usugumo Palace, a fictional site which appears within the Tale of Genji.[2]

Michinaga died in 1027 in the Amida Hall, located to the west of the pond, where he lay holding golden threads connecting him to nine statues of Amida Buddha, who he believed would use the cords to pull his spirit out of his body, escorting it on a lotus pedestal to the Pure Land.

Following Michinaga's death, the temple became a memorial to him, though it continued to grow under the guidance of his heirs, until its destruction in 1058.

Today, a stone marker on Kojinguchi-dôri, just east of Teramachi-dôri, marks the site. Though archaeological surveys have not found any evidence of the temple, textual sources indicate this to be the location, and Middle Heian period roof tiles have been found nearby. The temple Jiju-in is believed to have been originally established on this site in 1428, though it was later relocated.[2]