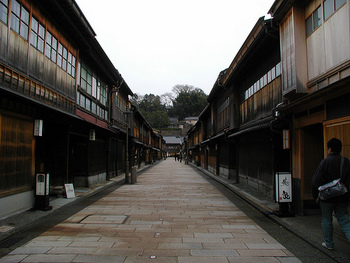 The main street of Higashi Chayagai.

The Higashi Chayagai is one of two geisha districts in the city of Kanazawa, along with the smaller Nishi Chayagai. It was set aside in 1820 by the lords of Kaga han for this purpose, and survives today as one of the country's few active geisha districts.

The district consists of three parallel rows of wooden buildings in traditional architectural styles, most of them machiya. Buildings in the district today, all of which are each privately owned, include several operating teahouses (chaya, i.e. geisha houses); the Shima teahouse (today, a sort of historical house / museum); Fukushima Shamisen, a shamisen shop which has been serving the local geisha community since the early or mid-19th century; a bathhouse called Higashi no yu; at least one minshuku (bed-and-breakfast); teashops and wine bars, a sushi restaurant, and stores selling various local tourist goods, such as cakes topped in gold foil. At the edge of the district sits the honjin, a larger building which once housed the geisha school, as well as serving as the guardhouse for the district.

A tea shop called Sabô-isshô used to be a teahouse (geisha house) called Funabashi-ya. Sabô-isshô is particularly well-known for its Kaga bôcha, a particular type of tea in which certain types of twigs are steeped in the hot water along with the tea. The shop prides itself on the fact that the Shôwa Emperor (Hirohito), who normally drank only black tea or coffee, tried their green tea when he visited the district.

The district borders the Asanogawa (Asano River) on one side, and Kanazawa's okachimachi, a samurai district, on the other side. Some of the samurai residences survive today, set back behind gated walls.