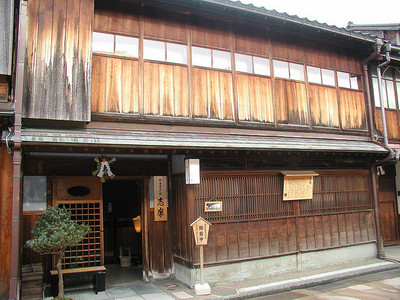 Shima is a historical teahouse (geisha house) in Kanazawa's Higashi Chayagai geisha district. It is one of only a few teahouses in the country to have received the honor of being designated an Important Cultural Property. Today it serves as a museum house, and is maintained as it would have looked in the Edo period.

It was constructed in 1820, along with the rest of the chayagai, the teahouses of which were among the only structures in the city granted exception from the ban on multi-story buildings.

One of a relatively few extant examples of Edo period commoner architecture, it features many elements typical of urban commoner homes and shops, and especially of geisha houses. Though the overall design shares much with machiya, there are of course elements distinctive of a teahouse. Some of the chief distinguishing features are handrails (bannisters) facing the front, and overhangs over the inner garden.

Another important point is seen in the menkawabashira[1] pillars which can be found around the building. They have four planed sides, but the corners are left natural, with the bark still on them; they were then lacquered in deep color. Bengara-colored earthen walls, golden objects and the like were placed according to a definite plan, creating an elegant and refined look to the rooms.

A large door called an ôdo lays at the entrance. This would have been kept open during business hours, and closed to secure the entrance at other times. A regular-sized door cut into the keyaki ôdo allowed for access at these times.

The first floor contained the geishas' private quarters, kitchen, and other private areas, while the rooms for entertaining guests were all located on the second floor. A set of stairs immediately before the genkan allowed guests to go straight to the second floor after entering.

To the right of the stairs is a chanoma ("tea room") with a hearth. Beyond that is the reception room and office, where the okami-san, the mistress of the house, kept her records. In the front of the house, the mise-no-ma was used by the geisha as they put on their makeup and otherwise prepared to meet their guests.

The okami-san's room, the oku-no-ma, lies behind the office, towards the back of the house. Behind that is a corridor, and the garden. An inner garden (tsuboniwa), a standard machiya feature, allows light in and air to circulate, while also providing a pleasant view for guests to enjoy.

The kitchen, to the left and rear of the house, on the other side of a wall behind the main stairs, was equipped with a well and stone cellar (ishimuro); stone canals carried waste water out, and water for use in.

Upstairs, narrow corridors provided access to the various rooms without disturbing other guests; a second staircase served the same purpose, allowing guests to come and go discreetly. As in most traditional Japanese spaces, sliding fusuma doors could be opened or closed to create larger or smaller spaces, as necessary for a given occasions. With all of the fusuma closed, the house held five rooms, plus one more in the back. The walls in some of the rooms are painted with bengara, the beams, shelves, and other wooden elements lacquered, for a lavish and sensual experience.

The extra room, known as the hanare ("removed [room]"), located in the rear of the house and overlooking the garden, was, as was typical for geisha houses, reserved for the most important guests. At Shima, the 'hanare is the only room where the beams are not lacquered, but are natural wood, providing a more relaxed atmosphere.

The area directly over the main staircase lacks a ceiling, extending up higher to the roof beams. This allows light to come in, and sound to escape, so that it does not reverberate through the house, disturbing other guests.