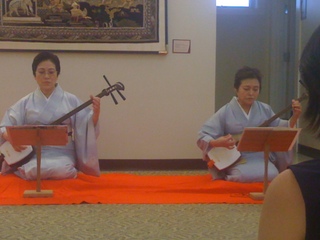 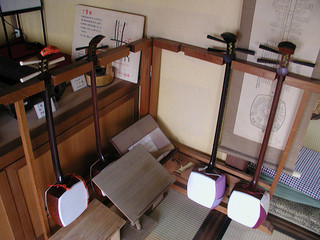 Shamisen on display at Shamisen no Fukushima, a shop which has been serving the geisha community of Kanazawa's Higashi Chayagai since the 19th century.

The shamisen[1] is a three-stringed musical instrument central to the musical traditions of the kabuki and bunraku theatre forms, of geisha and courtesan entertainments, and of various dance and storytelling traditions.

Construction and Manner of Playing

The shamisen comes in a number of forms, including nagauta shamisen (used chiefly in kabuki, and in contexts related to the pleasure quarters), gidayû shamisen (used chiefly in the puppet theatre), and tsugaru shamisen (a more recently developed instrument central to a folk musical tradition of Aomori prefecture). These differ mainly in the length and thickness of the neck, size of the body of the instrument, and in the tuning. For the most part, however, they all share the same basic form, namely that of a three-stringed wooden instrument with a square body, employing catskin on the body[2], and struck with a large plectrum called a bachi. The various types of shamisen used in the kabuki theater differ in the thickness of their necks, and certain other aspects, but all have the same length neck, and hence the same length strings (roughly 62cm).[3]

The shamisen is largely a monophonic instrument, meaning that only one note is struck at once; it does not rely on chords as does the modern/Western guitar. Reverberations, known as sawari, which occur when the bachi strikes the strings, or the body of the instrument, are essential to the distinctive "shibui" (bittersweet) sound of the instrument, though this is generally considered undesirable in Western music. Such reverberations are strongest in the tokiwazu, kiyomoto, gidayû, and Tsugaru styles, and weakest in the nagauta, jiuta, and kouta modes.[3] Shamisen music is also traditionally heterophonic, meaning that the pitches sung do not directly correspond to the notes played on the instrument at that moment; the Japanese term tsukazu hanarezu is used to refer to the way shamisen music and its accompanying vocals typically follow the same melody line, for the most part, but are off from one another by a half-beat or more. This is a typical feature not only of certain genres of shamisen music, but of Edo period popular songs in general, including as well those songs accompanied on the koto.

Shamisen players employ tabulature, not absolute pitch, in their notation, but the tuning of the instruments, naturally, corresponds to certain pitches as understood in Western notation. The most common tunings are called honchôshi (lit. "core/basic tuning"), in which the three strings are tuned to B-E-B on the Western scale; niagari, in which the second (middle) string is raised up to F sharp; and sansagari, in which the bottom (highest pitched) string is lowered, such that the three strings are tuned to B-E-A.

The shamisen is believed to have first emerged in Japan in the late 16th century, being developed out of the snakeskin sanshin introduced to Japan from Okinawa at that time (the sanshin itself had developed out of the Chinese sanxian, likely introduced into Okinawa in the late 14th century). The Okinawan sanshin is believed to have been introduced to the Japanese port of Sakai (near Osaka) sometime around 1558-1567; according to some tales it was a blind mendicant performer, a biwa hôshi named Ishimura Kengyô, who first brought a sanshin back from Okinawa and created the first shamisen.[4] The Japanese form of the instrument developed and spread quickly, spreading throughout Japan by around 1595.[5] Ryukyuan performances may have been heard by certain Honshû daimyô as early as 1575, if not much earlier, and at least one record notes a shamisen player from Yamashiro province (Kyoto) as early as 1580.[6]

Following its appearance, the shamisen quickly became incorporated into a variety of popular entertainment modes and traditions, eventually being adopted into the kabuki and puppet theatres, and geisha and courtesan teahouses, though it was never adopted into more elite contexts such as the Noh theatre. Some of the earliest genres that made use of the shamisen include jiuta and kouta (parlor songs often accompanying dances), zokkyoku (one of the chief styles of geisha music), and the sekkyô-bushi and jôruri storytelling modes. The ningyô jôruri puppet theater incorporated the shamisen from the very beginning, around the year 1600, developing its own distinctive genre (gidayû-bushi) and indeed its own distinctive style of instrument (the gidayû shamisen) by the early 18th century. Meanwhile, though it has been suggested that the shamisen was not initially incorporated into onna kabuki (women's kabuki) in the early 17th century, it became the central musical instrument in kabuki by the 1650s.[7]

The shamisen was strongly associated with the so-called "floating world" of Edo period urban popular culture, and with the popular aesthetic known as iki or sui. It nevertheless possessed some cache among elite classes, and shamisen was perhaps the most common cultural skill practiced by young women in the Edo period, and demonstrated by young women as part of their interviews or auditions for employment as attendants in samurai households.[8] While shamisen may have been a key element of the aesthetic of "cool" or "chic" in the Edo period, some scholars argue that it was because of this very same strong association with low-class, popular culture (and not elite culture) that shamisen music was during the Meiji period not raised up as a celebrated example of traditional Japanese music, and that Japan instead turned away from these traditions and embraced Western classical music as strongly as it did.[3]

The shamisen is used in a wide variety of styles and genres of music, including popular and folk styles, as well as in the kabuki and puppet theatres, geisha traditions (and, formerly, in the red light districts), and traditional (hôgaku) and neo-traditional (shin-hôgaku) concert traditions.

Styles or genres employed in the kabuki theatre, and in traditional dance derived from kabuki (Nihon buyô) include nagauta, tokiwazu, kiyomoto, and gidayû-bushi; the latter is the chief style employed in the ningyô jôruri (bunraku) puppet theater.

Styles of short lyric songs accompanied on shamisen which were popular in the licensed quarters of the Edo period included kouta, hauta, utazawa, dodoitsu, and zokkyoku, among others. Kouta, which formed the basis of kabuki music before the advent of nagauta, along with hauta, were later incorporated into nagauta, jôruri, folk, and popular music. Kouta remains a prominent element of the geisha musical repertoire today, and while a number of styles classified as kokyoku ("old songs") are no longer performed in the theater, they continue to be performed in concerts and recitals.

When performed in concert, nagauta is often accompanied by hayashi (an ensemble of drums, flutes, and sometimes other instruments, derived from kabuki); unlike many other theatrical musical styles, nagauta has grown into a musical style in its own right, with many schools and individual performers eschewing connections to theater and dance, viewing musical accompaniment as a lesser activity than performing concerts where the music is the primary focus.[9] Though the tokiwazu and kiyomoto styles often serve as accompaniment for theater and dance, when these styles are performed in a concert context, they are much less likely than nagauta to incorporate hayashi or dance, focusing instead solely on the vocal singing and shamisen playing.