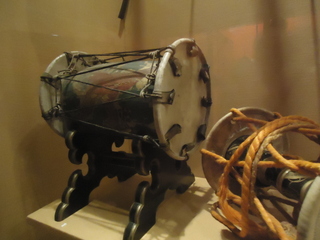 A kakko (left), compared with a ko-tsuzumi, on display at the Metropolitan Museum of Art.

The kakko is an ancient or classical style of drum, introduced to Japan from China in the 7th century, and prominent in gagaku (the music of the Imperial Court, particularly of the Nara and Heian periods) and tôgaku (Chinese music), in which plays a key role in setting and maintaining the rhythm for the ensemble.

It is played with a pair of thin drumsticks, while seated in a kneeling position, and is occasionally used in kabuki to evoke the sound or atmosphere of the Imperial Court.