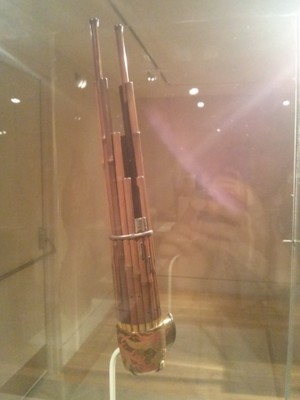 A 19th c. Japanese shô on display at the Peabody Essex Museum

For the Shô family of Ryûkyû, see Shô Dynasty.

The shô is a Japanese reed (wind) instrument, closely related to the Chinese shēng. Both are formed of a collection of small bamboo tubes, pointed vertically, in a single metal bowl which the performer holds in their mouth; free metal reeds help produce the sound. Played somewhat similarly to the harmonica, by a combination of blowing and sucking air through the tubes, it is the only major Chinese or Japanese wind instrument that can sound multiple notes at once.

The shēng is believed to have originated in Southeast Asia, and to have been played in China as early as the 12th century BCE. Traditionally playing a central role in Confucian music, it is today seen in China chiefly in folk music, and in Beijing opera (jingju).

Meanwhile, the Japanese shô became a central instrument in Imperial court music (gagaku) from a very early period, and continues to be performed in that context, though rarely outside of it.