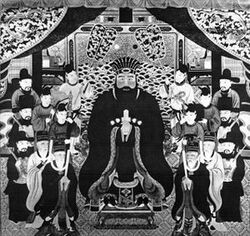 Ogo-e (lit. "honorable after-portrait") were posthumous portraits painted of each king of the Ryûkyû Kingdom following the king's death.

Ten such portraits have been confirmed to have existed, from Shô En through Shô Iku. All were destroyed in the 1945 battle of Okinawa, but pre-war writings indicate they were richly colored, painted in mineral pigments on paper. Today, these portraits survive only in black-and-white photos by Kamakura Yoshitarô. Efforts are being made to reconstruct the techniques or reproduce the portraits.

The portraits serve as a valuable resource for understanding royal ceremonial garb of the time. They appear to show that royal robes (hibenfuku) grew more elaborate and opulent over time.[1]

The Ogo-e portraits reflect close interconnections and notable distinctions between Ryukyuan painting traditions and those of other East Asian courts. Whereas Japanese portraits typically depict figures seated at a roughly 3/4 angle, facing off to the left or right, Ryukyuan royalty and aristocracy face front in their official portraits. They are also depicted with a group of followers or attendants, and with standing screens, bookshelves, and other accouterments in the background, like Korean kings; Chinese and Japanese portraits, by contrast, typically have minimal or no background, and no secondary figures depicted.[2]