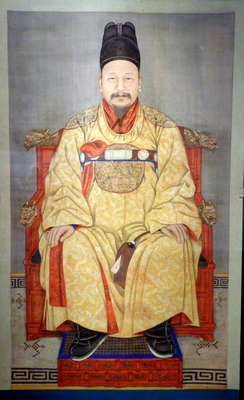 King Gojong, later known as Emperor Gojong, was the last king of Joseon Dynasty Korea, and the first emperor of the self-declared Korean Empire.

In 1866, he was married to a daughter of Min Chirok, after which she came to be known as Queen Myeongseong.

Queen Myeongseong was assassinated by Japanese terrorists in 1895. She was later posthumously named Empress, and was ultimately buried alongside Gojong in the Imperial Tombs at Hongneung.

In 1897, Gojong declared the Kingdom of Korea ended, and the beginning of the Korean Empire. Naming himself Emperor, and overseeing numerous changes to royal (now imperial) symbols, ceremonies, and court structure, he sought to place Korea on a more equal footing with Qing Dynasty China and Imperial Japan, in order to help stave off colonization.

The 40th anniversary of his reign was celebrated in 1902 with the erection of a monument which still stands in Seoul today. His son, the crown prince who would later succeed him as Emperor Sunjong, contributed his calligraphy to the monument, which celebrates both the 40 years of Gojong's reign, and his establishment of the Great Korean Empire.[1]

Gojong's son by Queen Myeongseong succeeded him, taking the throne as Emperor Sunjong. Gojong also had a consort, Royal Noble Consort Gwibi, with whom he had another son, Imperial Prince Yeong.