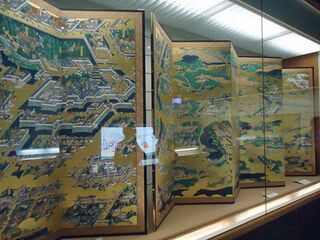 The Edo-zu byôbu, on display at the National Museum of Japanese History. Edo castle is visible on the left side of the image 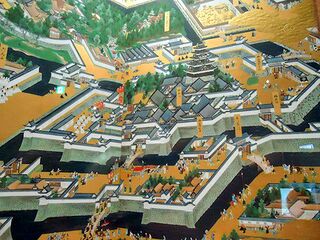 A detail of the Edo-zu byôbu showing Edo castle with its tenshu, before the Great Meireki Fire

The Edo-zu byôbu (lit. "folding screen picture of Edo") are a pair of folding screen (byôbu) paintings held by the National Museum of Japanese History and depicting a number of sites and scenes in the city of Edo from a bird's eye view perspective, in a rakuchû rakugaizu form. The screens are believed to have been commissioned by Shogun Tokugawa Iemitsu following the death of his father, Tokugawa Hidetada; as such, they are among a rare few depictions of Edo prior to the 1657 Meireki Fire. Details from the screens are commonly seen in history textbooks and the like in Japan.

Reflecting Iemitsu's interests, much of the screens are taken up by depictions of shogunal hunting grounds. However, the work also includes images of Edo castle and other important sites of the city, and is of particular interest as well for its depictions of formal processions. These include shogunal processions, of entourages accompanying Iemitsu to Zôjô-ji to pay his respects to his father, and to Momijiyama Tôshôgû to pay respects to his deified grandfather Tokugawa Ieyasu, as well as shogunal processions to and from the hunting grounds, and, a procession of a Korean embassy to Edo. One such mission which came to Edo in 1636 would be the most likely candidate for depiction if we take this to be a depiction of a specific event; however, it is more likely it is meant to represent the Korean embassies in general, as a celebration of Tokugawa power and legitimacy. Finally, sankin kôtai processions are also seen in these screens.