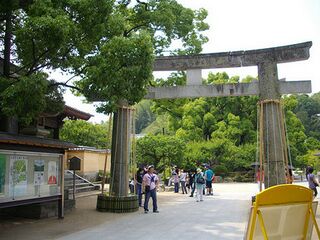 A stone torii at the shrine, dated to the 14th century and believed to be the oldest extant torii on Kyushu

Dazaifu Tenmangû is a large Shinto shrine in Dazaifu, a short distance outside of the Kyushu city of Fukuoka. It is one of the top three Tenjin shrines in the country, along with Kitano Tenmangû in Kyoto and either Egara Tenjin Shrine in Kamakura or Umeda Tenmangû in Osaka.[1] The shrine also serves as the mausoleum of Sugawara no Michizane, the courtier who was posthumously deified as Tenjin, kami of scholarship.

Michizane died in 903 at the South Hall of the Dazaifu government complex (today the site of the Hinoki Shrine), and his attendant Umasaka no Yasuyuki buried his remains at this site. Two years later, a shrine was erected at the site of the grave. A temple for his grave, called Anraku-ji, was built very shortly afterwards; its first head was Sugawara no Hiratada, Michizane's grandson. His direct descendants continued to head the shrine generation after generation. In 1868, the temple was merged into the shrine.

The shop-lined pedestrianized sandô (main road leading to the shrine) includes several large stone torii. After a sharp left-turn, one passes through another stone torii, and then over a bridge designed in three sections, said to represent the past, present and future. The bridge crosses over a pond said to be in the shape of the kanji kokoro (心, "heart").

The next stone torii one encounters is said to be the oldest in Kyushu. It is believed to have been a gift from Nitta Ôinosuke, lord of Arisaka castle, during the Nanbokuchô period (1336-1392).

A two-story rômon (shrine gate) three bays wide leads into the main plaza before the main worship hall (honden). Within this plaza are several plum trees, one of which is said to have been Michizane's favorite tree, which uprooted itself and flew to Dazaifu from Kyoto to be with him.

Numerous tiny sub-shrines can be found along a path outside of this central plaza. A number of small cafés or restaurants are located within the shrine's gardens, along with a small museum of the life of Sugawara no Michizane.

A path leads up away from the shrine, to an Inari shrine up in the mountains. The Kyushu National Museum and a small amusement park are also quite nearby.