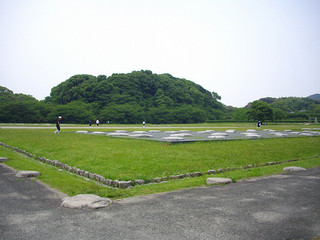 The site of the Dazaifu government headquarters.

This article is about the regional government headquarters. For the city, see Dazaifu (city).

Located in the city of the same name[1] and established in 701,[2] the Dazaifu served during the Nara and Heian periods as the administrative center for governing Kyushu on behalf of the Imperial Court, overseeing the nine provinces and three islands[3] of the Saikaidô or Kyushu region. The Dazaifu managed both domestic/internal affairs, and foreign affairs, including the reception of foreign dignitaries and shore defenses. The Dazaifu claimed a monopoly on authorized, legitimate foreign trade throughout the Heian period, though numerous local power-holders (kenmon) and others flouted these controls; by the end of the 12th century, the Dazaifu had "definitively lost its monopoly over maritime trade," as power-holders such as the Minamoto and Taira clans, aristocrat families, temples, and shrines increasingly skirted Dazaifu procedures or oversight in conducting foreign trade themselves.[4]

After the end of the Heian period, the offices fell into disuse, and the city of Dazaifu transformed into a more rural community, as it remains today.

The site today is maintained as a historical site; foundation stones and graveled areas remain, indicating the rough layout of the administrative compound. Archaeological efforts, begun in the 1950s-60s, are ongoing.

Like the Imperial Palace, aristocratic mansions, and many other elite sites of the Nara and Heian periods, the Dazaifu compound was oriented towards the south. The main gate to the south, a large red wooden structure, was used to receive foreign embassies and other important visitors, while a small door in the tsujibei walls off to the sides of the gate were used by the Dazaifu officials for their everyday comings and goings. This Southern Gate (南門, nanmon), along with the Central Gate (中門, chûmon), were the first to be excavated, in 1968. Examining the foundation stones, it was determined that these gates dated to the Heian period, and must have replaced earlier Nara period structures.

The Main Hall, or Seiden (正殿), of the Dazaifu government complex was where the head of the Dazaifu government, known as a sochi (帥), governed from. Various rituals and ceremonies were performed here, and it housed the sochi's personal office as well. Functioning like a miniature version of the central government in Kyoto, Dazaifu supervised and controlled the various provinces of Kyushu. It is thought that, just like in the New Year's celebrations in the Imperial Capital, on New Year's, the various officials (国司 , kokushi) of Kyushu would gather for ceremonies in the Seiden at Dazaifu. In order to maintain order in Kyushu, the Seiden was thus built to express great majesty and dignity.

The "gouden" or "ushirodono" (後殿) was a structure which sat behind the main hall in the complex. While the main hall would have been used for formal meetings, particularly receiving visitors from the capital or elsewhere, this "Rear Palace" was used for more practical, everyday bureaucratic affairs. Two towers flanked the Rear Palace to the east and west.

Excavations have revealed three periods of construction on the site. The first period is characterized by buildings supported by pillars embedded into holes dug in the earth, while in the second and third periods, foundation stones such as the ones we see on the site now were used. The central and southern gates were built in the second period, and then rebuilt in the third period on the same scale, and with the same construction methods. Recent surveys have determined that the Seiden was also built, and rebuilt, at these times, again with the same construction methods, materials, and scale. Examination of the soil layers revealed burnt earth and ash which confirmed that this rebuilding occurred following the rebellion of Fujiwara no Sumitomo in 941, when the complex was burned. Remnants or signs of fences, drainage ditches, support pillars, and the like were also found below the central area of the Seiden. The buildings on the complex were arranged neatly on a grand scale, each surrounded with fences and drainage ditches. It is believed that as early as the first period, there was a consciousness about ceremonial space at play here.

Judging from the remaining foundation stones of the third period, it is believed that the Seiden was 7 bays wide (28.5 m) and 4 bays deep (13 m). Sections in front and back had three levels, and there are foundation stones for a wall in front of the building as well. Giant stones were used as the bases for pillars roughly 75cm in diameter, and carved to form three circular levels (as seen in some of my other photos). Judging from the results of this survey, and from the role of the Seiden, it is thought that the roof would have been in yosemune (hipped) style, and that the eaves would have been constructed separately and then attached. The pillars would have been painted red, the walls white, and it can be imagined that the interior of the building would have been arranged in an atrium-like manner, with large open spaces. Frightening gargoyles (鬼瓦, onigawara, "demon tiles") graced the roof.

The site is divided into two or three main sections, with these dirt paths and graveled avenues lined by foundation stones which can be presumed to have once supported pillars, and perhaps a covered wooden walkway helping to connect the buildings, so courtiers did not have to put shoes on and take them off to go from one building to the next.

Though nothing remains of the original wooden buildings, the grid orientation of foundation stones indicates where wooden pillars once stood, giving an indication of the size and shape of each building. Wooden pillars, supported on these foundation stones, would have in turn supported raised wooden floors, elevated above the ground. The architectural style of the buildings, overall, is presumed to have differed little from those of the Heian Imperial Palace or other elite structures of the time.

Remains of government offices (structures) have been found not only on the main site, but for a few hundred meters to the east and west as well, for a total of 18 different offices (departments) in seven areas or groupings.

The city would remain the regional headquarters for Kyushu under the Kamakura shogunate, which established the Chinzei-fu there in 1186.

From 1360 to 1372, the site became the headquarters of the Seiseifu, the center of Southern Court support in Kyushu against the Northern Court and Muromachi shogunate, led by Prince Kaneyoshi.[5]

The conservation of the site began back in the Edo period, when Fukuoka han, under the daimyo of the Kuroda clan, performed a survey of the foundation stones. Even as the eras changed, from Edo to Meiji to Taishô to Shôwa, the spirit of conservation remained, and stelae and plaques were placed in honor of the site. Simple conservation efforts were centered upon the ruins of the main hall.

In the early 1960s, as the site is near Fukuoka City and was deemed suitable for housing, plans were made to build housing here. In order to protect the site from the effects of development, a community protection committee formed and sought to have the area designated as cultural property expanded. The site is closely related to the local people's lives, and so a careful attitude had to be taken. Night and day there were meetings with government officials, and eventually they gave their understanding and cooperation. Through cooperation with the local people, excavations and site maintenance continue today.

Directors of the Dazaifu