The battle of Hakodate

The former Bakufu retainers leaded by Enomoto Takeaki escaped from Edo in 1868/4 and arrived at Ezo in 1868/10. After they occupied Goryôkaku fort, they headed to capture Matsumae castle.

In 1868/11/5, the ground troops leaded by Hijikata Toshizo overthrew Matsumae han's defence line at Oyobegawa river. They occupied the hill in front of Matsumae castle. The castle had 7 batteries. Everytime when Hijikata's soldiers came close to Karametemon gate, the Matsumae soldiers opened the gate to fire the cannon and closed quickly. While they were taking the same tactic over and over again, Hijikata took small unit and entered the castle from behind.[1] Matsumae han surrendered in 1868/11/20. But the former Bakufu retainer troops lost their battleships Kaiyô-maru and Shinsoku-maru during the battle. In 1868/12/15,they declared the Republic of Ezo and Enomoto was elected to be the president.

Next they planned to seize the warship Kôtetsu that was anchoring at Kuwagasaki harbor in Miyako bay. Kôtetsu was an ironship that Tokugawa Bakufu purchased from the U.S. but it was possession of the Imperial forces at the time. 1869/3/21, Kaiten-maru, Banryû-maru and Takao-maru left Hakodate, but only Kaiten-maru was able to reach Miyako bay. Kaiten-maru succeded to do surprise attack against Kôtetsu, but only 7 crews were able to jump on the deck of Kôtetsu and they were all shot. Fortunately there were only supply ships near Kôtetsu. Once they realized the operation failed, they quickly left the bay. Kôga Gengo the captain of Kaiten-maru was killed in the battle. 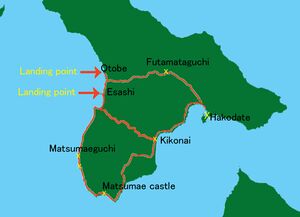 1869/5/11, the Imperial troops attacked Hakodate. They had 7 ships to support the ground troops but one of them Chôyô-maru was sunk by Banryû-maru. Hijikata was killed when he was on the way to Benten battery to rescue Shinsengumi.

1869/5/16, the nearest battery from Goryôkaku was occupied. The Republic of Ezo surrendered in 5/18 and Boshin war ended.

Battle of Hakodate in Fiction

This article is a rough draft which is in need of cleanup (grammar, spelling, corrections, links, formatting, etc.). You can help SamuraiWiki by editing it. Click here for a list of articles that have been tagged as a draft copy.
Retrieved from "http://samurai-archives.com/w/index.php?title=Battle_of_Hakodate&oldid=43855"
Categories: