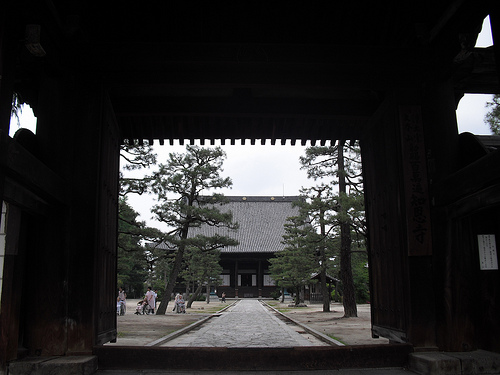 Hyakumanben Chionji is one of eight Head Temples of the Jôdo-shû sect of Buddhism. Formerly, to the north of Imadegawa, near where Shôkoku-ji is now, in what was then the territory of Kamo Shrine, there was a thatched hut called Kamo no Kawaraya, and at the request of the head priest of that shrine, the Buddhist priest Hônen was persuaded to stop and stay there for a time. He made the place a site of proselytizing.

After Hônen's death, the monk Seikanbô Genchi, out of respect for the master, constructed a Mieidô, establishing a new temple and calling it Chion-ji. Thus was the origin of this temple, which began as a temple attached to the Kamo Shrine.

In 1331, when an epidemic was sweeping over the land, the eighth abbot, Zenna, shut himself up in the temple for seven days, chanting 1,000,000 nenbutsu and warding off the epidemic. Emperor Go-Daigo thus granted the temple the additional name of Hyakumanben (lit. "one million iterations", or "one million times"). After that, the temple moved from place to place, moving to its current location in 1661.

The main hall (hondô) holds a wooden sculpture supposedly of Hônen as he looked at age 43. To the southeast is a Miedô holding a statue of Shaka, and to the West, the Amida Hall or Nenbutsu Hall.

A number of Important Cultural Properties are held here, and in the graveyard are shrines to Hônen and Genchi, as well as the grave of painter Tosa Mitsuoki.