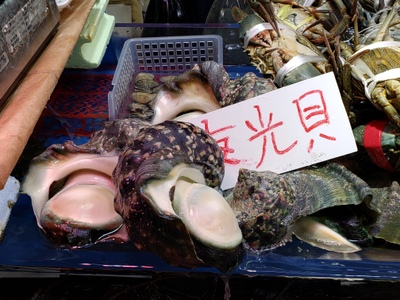 The turbo or turban is a type of sea snail or mollusk which has long been collected for its iridescent shell, which is used to make decorative mother-of-pearl inlay on lacquerwares.

Up until the 11th century or so, the Amami Islands were one of the chief sources of turbo in the region. Shells collected at sites such as the Kasari peninsula on Amami Ôshima were traded throughout the region (to Korea, Japan, China, and the Ryûkyûs). Spoons, jewelry, and other luxury items made from turbo shell were extensively used by Heian period court aristocrats and others and have been found as far away as Hiraizumi.[1] Within the Amamis, this trade helped fuel the acquisition of equipment and raw materials for producing iron tools and other goods.

By the end of the 11th century, however, demand for the shells came to exceed the amount being produced in the Amamis, and so the Amami islanders began to increasingly trade locally-produced kamuiyaki pottery with people on Okinawa Island and elsewhere for turbo shells they had collected. Kumejima (just west of Okinawa Island) and Katsuren (in northern-central Okinawa) emerged as major sites of turbo export. This increased importance or prosperity of the production at sites such as Katsuren also contributed to turbo shells becoming venerated as sacred items; a number of turbo shells from Kumejima are among the only physical items (that is, other than people or deities) associated with the honorary and sacred term kikoe ("resounding") in the Omoro sôshi.