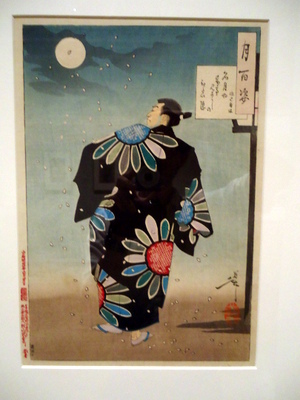 Fukami Juzaemon, from Yoshitoshi's series "One Hundred Aspects of the Moon"

Tsukioka Yoshitoshi was a prominent print designer of the Meiji period, and is often considered one of the last great ukiyo-e masters.

Yoshitoshi is known for incorporating Western elements of the use of space, shading, perspective, and lighting to create a more modern ukiyo-e aesthetic. He produced countless woodblock prints and newspaper illustrations, including depictions of the Satsuma Rebellion and other events of the time. He is perhaps best known, however, for his series "One Hundred Aspects of the Moon," which featured historical and literary figures traditionally associated with the moon, from Toyotomi Hideyoshi and Emperor Kaika to Yûgao from the Tale of Genji. This series, his largest, took seven years to complete; beginning in 1885, he completed the series just two months before his death in 1892.

His stepson and student Tsukioka Kôgyo was a significant print designer of the time as well, and is particularly known for his prints depicting scenes from the Noh theater.