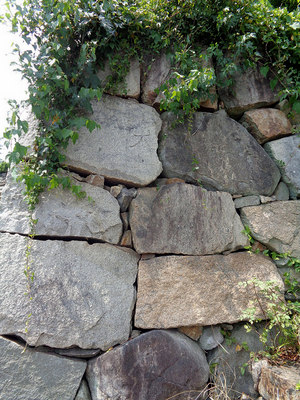 Section of the stone walls of Tomo castle

Tomo castle was the center of authority for a sub-fief within Fukuyama han, located in the port town of Tomonoura.

The castle was erected by the Môri clan, and repaired in the 1600s-1610s under Fukushima Masanori, who granted it and an associated 8,131 koku fief to his retainer Ôzaki Genba, who then ruled that territory with some 342 retainers of his own under him. A 1607 account written by Korean envoys records that the castle was in the process of reconstruction. The castle originally boasted three baileys (honmaru, ni-no-maru, and san-no-maru), containing a three-story tower keep (tenshu), a sizable main gate (Ôtemon), and yagura. The keep was torn down in 1619 in accordance with the "one castle per domain" policy imposed by the Tokugawa shogunate, but the gate and yagura mansion (yashiki) survived the first century of the Edo period, up until they were lost in a fire on 1711/1/13.

After Fukushima Masanori was replaced by Mizuno Katsunari as lord of Fukuyama in 1619, Katsunari named his son Mizuno Katsutoshi to be lord of Tomo, and had a mansion built for him in the san-no-maru (third bailey). Katsutoshi was to be the last "lord" or castellan of Tomo, being replaced by Hagino Shin'emon, who became the first of a long line of Tomo bugyô (Tomo Magistrates), who occupied the mansion (yashiki, formerly known as the "castle," or oshiro) and oversaw the administration of the port-town from that time forward.

The bugyô's mansion sat up against a hill or mountain to the south, and was fronted by moats to the north and east. A castle gate with an irimoya-style roof stood atop stone foundations, and there was a residence for ashigaru on the site as well. All of this was destroyed, however, in a fire on 1711/1/13. The mansion was over nine tan in size (75 by 36 1/2 bays).

The former site of the castle is today home to the Fukuyama City Tomonoura History Museum, established on the site in 1986.