Takeda Katsuyori was the 4th son of Takeda Shingen and prior to Shingen's death, the head of the Suwa Clan. He was the 20th and second to last lord of the Takeda clan, famous for his conflict with Oda Nobunaga and Tokugawa Ieyasu.

In 1542 Takeda Shingen defeated Suwa Yorishige of Shinano Province and took his daughter as a mistress. Katsuyori was born in 1546 and in 1562 became the head of the Suwa family and was established at Takato Castle in the Ina District of Shinano. The following year he accompained his father on campaign in the attack on Musashi-Matsuyama Castle [武蔵松山城].

In 1565, Shingen and Oda Nobunaga of Owari province established friendly ties and Katsuyori wedded Nobunaga's niece and adopted daughter, Tôyama-hujin, in the 11th month of that year. Two months previously, Shingen's heir, Yoshinobu, had been placed under confinement on the grounds that he had plotted against his father. In 1567 Tôyama-hujin gave birth to Takeda Nobukatsu in a difficult delivery from which she afterwards died. In the 11th month of that year, Yoshinobu was ordered to commit suicide. Since Shingen's second son, Unno Nobuchika, had been born blind and his third son, Nobuyuki, had died sometime around 1553, Katsuyori was named as the heir. In 1570 he would be ordered to move his household from Suwa to Tsutsujigaseki in Kai Province. On the other hand, another version of events has Nobukatsu in fact being adopted by Shingen's younger brother, Nobukado, and named the heir, with Katsuyori to act as his guardian. Supporting this view are the facts that Katsuyori was considered an illegitimate son and had already been adopted into another family, the Suwa.

Katsuyori gained a reputation as a fearless fighter in Shingen's battles against the Hôjô and Tokugawa families. In the 4th month of 1573, while campaigning against Tokugawa Ieyasu, Shingen fell ill and then died at Kobata in Shinano Province. Katsuyori led the Takeda army back to Kai in the aftermath and assumed leadership of the clan. Here again the circumstances of this process are unclear, given the possibility that Nobukatsu had been adopted by Nobukado. 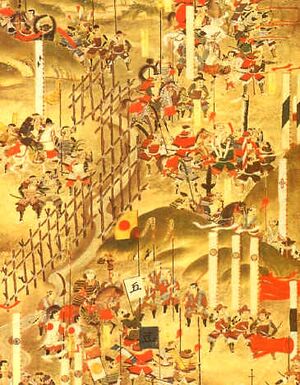 The allied forces of Oda and Tokugawa at Nagashino. (1575)

Carrying on his father's war with Tokugawa Ieyasu, Takeda troops captured Akechi Castle [明智城] in Mino Province while Katsuoryi managed to bring down Takatenjin Castle [高天神城] in Tôtômi Province, in the 2nd and 6th months of 1574, respectively. The following year he planned to capture Ozaki Castle in Mikawa, assisted by a treacherous minister who promised to throw open the gates when the Takeda arrived. This would isolate Ieyasu at Hamamatsu in Tôtômi, cutting him off from Oda reinforcements, and possibly lead to his surrender or death. Unfortunately for the Takeda, the plot was uncovered by the Tokugawa even as Katsuyori was on the march, and Katsuyori called off the attack, deciding instead to invest Nagashino Castle. Intended as something of a consolation prize (if popular tradition is correct on this point), Nagashino proved a tough nut to crack, resisting attempts at mining, burning, and direct assault. Katsuyori decided to lay siege, and threw up a perimeter about the castle. A brave defender, however, managed to slip through by swimming out via river. This man, Torii Sune'emon, managed to reach Ieyasu and warn him of Nagashino's plight. After some prodding, Oda Nobunaga agreed to throw his own might into the relief effort, and at length a 38,000 man army drew up across from the Takeda at Nagashino. Katsuyori elected to attack. The odds against victory were steep, as the Oda and Tokugawa had thrown up defensive structures and possessed a considerable numerical advantage, and certain of Katsuyori's retainers advised against making the attempt (see The Battle of Nagashino). The result was a crushing Takeda defeat that saw a high percentage of the army killed, including many seasoned Takeda retainers. In the aftermath, the Oda recaptured Iwamura Castle in Mino, taken by the Takeda in 1572. 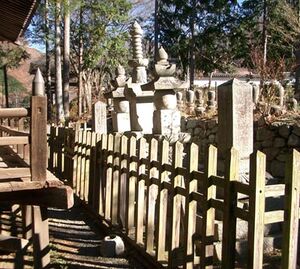 The ability of the Takeda to extend its influence ended after Nagashino and Katsuyori felt compelled to marry the sister of Hôjô Ujimasa in the 1st month of 1577. Uesugi Kenshin of Echigo Province, until now loosely aligned with the Oda against the Takeda, had changed course out of concern for the Oda's advance into Kaga Province and made peace with Katsuyori. Oda Nobunaga was content to leave Tokugawa Ieyasu to contain Katsuyori and the Tokugawa alone did not have the strength to seriously damage the Takeda's position. Thus, despite the serious blow dealt by Nagashino to the Takeda, it did not prove immediately fatal.

In 1578, following the death of Uesugi Kenshin, civil war broke out between his two successors, Uesugi Kagetora and Uesugi Kagekatsu. Kagetora had been adopted from the Hôjô family and so the Hôjô expected Katsuyori to support him. However, Katsuyori came out in favor of Kagekatsu. It is unclear if this was primarily as the result of Kagekatsu offering to give Katsuyori the lands the Uesugi controlled in Shinano or out of a fear that, should Kagetora win and the Hôjô thus assume so much influence over Echigo, the Takeda might someday be virtually surrounded by enemies if the Takeda-Hôjô alliance folded. Ujimasa was furious by Kagekatsu's bad faith and cancelled his alliance with Katsuyori and opened relations with the Oda and Tokugawa. On the other hand, although Kagekatsu had triumphed in Echigo, the Uesugi clan was badly weakened by the so-called Otate no ran and at any rate pressed by Oda advances in Etchu Province, leaving Katsuyori effectively isolated after all.

In 1580 Takeda and Hôjô troops clashed in Suruga Province and in the 3rd month of 1581 Takatenjin Castle in Tôtômi Province fell to the Tokugawa. This represented a serious blow to the prestige of the Takeda and further disenchanted Katsuyori's retainers. Katsuyori spent the rest of the year attempting to shore up the Takeda's army and defenses, to that end ordering large drafts and levies of labor and funds and directing Sanada Masayuki to begin construction of Shinpu Castle [新府城] at present-day Nirasaki, where Katsuyori intended to move the Takeda headquarters. These moves served to further tarnish Katsuyori's reputation within the Takeda domain.

In the 2nd month of 1582, Katsuyori's retainer, Kiso Yoshimasa of Fukushima in Shinano, discontented at material demands related to the building of Shinpu, rebelled. Katsuyori immediately raised an army, heedless of bad weather, and marched against Fukushima in what developed into a pointless fiasco that crushed whatever morale his retainers had left. Soon afterwards, a combined army of Oda, Tokugawa, and Hôjô troops invaded Kai and Shinano. The majority of Katsuyori's troops deserted, including his uncle, Nobukado, and Anayama Nobukimi, neither of whom having enjoyed good relations with Katsuyori since the death of Shingen. His younger brother, Nishina Morinobu, on the other hand, made a gallant if futile stand at Takato Castle. Katsuyori burned the incomplete defenses at Shinpu and set out for the promised protection of Oyamada Nobushige's Iwadono Castle [岩殿城], only to find the gates barred to him. Pursued by enemy troops under Takigawa Kazumasu and all but abandoned by his men, Katsuyori committed in the shadow of the Tenmokuzan with his son Nobukatsu and wife while his last few retainers, three Tsuchiya brothers, held the enemy at bay.