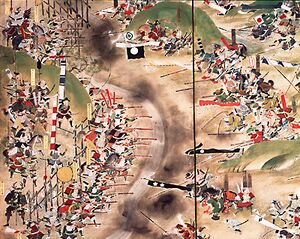 In the summer of 1575, Takeda Katsuyori led his army into the Tokugawa domain and laid siege to Nagashino castle, a locally important strongpoint that had changed hands a number of times in the past few years. The castle's defenders managed to resist the initial Takeda attacks and, thanks to the heroic efforts of a certain Torii Sune'emon, managed to alert Tokugawa Ieyasu of their plight, and the latter convinced Oda Nobunaga to commit to an all-out battle with the Takeda. When faced with the appearance of a numerically superior enemy force, Katsuyori, over the objections of his veteran commanders, opted to attack. Thanks to superior firepower (as many as 3,000 arquebuses were used in the battle) and good position, Oda Nobunaga and Tokugawa Ieyasu crushed the Takeda attack and relieved Nagashino Castle. Most of the famous Takeda generals present were killed in the battle and the offensive power of the Takeda was severely crippled (having lost around 10,000 men). Nobunaga was now free to fully turn his attentions elsewhere, leaving Ieyasu to contain the battered Takeda.

The most common version of the battle was set down by the General Staff of the Japanese Army in 1910 in its History of Warfare in Japan. Their source for the Battle of Nagashino was Oze Hoan’s Shincho-ki, a later derivitive of the Shinchoko-ki. The Shinchoko-ki, written by Oda and Toyotomi retainer Ota Gyuichi, is considered a far more reliable source of information on the campaigns of Oda Nobunaga. It records that the armies of Oda and Tokugawa contained 1,000-not 3,000-rifles and says nothing about volley fire.

The Japanese scholar Owada Tetsuo has argued that the figures for troop strengths on both sides should be halved.