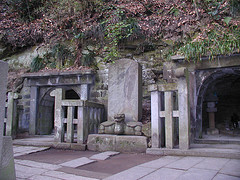 The graves of Shimazu Tadahisa and Môri Suemitsu in Kamakura.

Koremune Tadahisa was the founder of the Shimazu clan, and of the clan's claims to both Satsuma province and the Ryukyu Islands.

Tadahisa was the son of Koremune Hirokoto, head of the Imperial Guard (Konoe); his mother, Tango no tsubone, was the younger sister of Hiki Yoshikazu[1]. According to some accounts, he was an illegitimate son of Minamoto no Yoritomo, and adopted into the Koremune clan; this theory or myth is no longer widely held as fact by scholars, however.[2][3].

A gokenin (retainer, or "houseman") of the Minamoto clan,[4] he was named shugo (military governor) of Satsuma and jitô of the Shimazu shôen by Shogun Minamoto Yoritomo in 1187, and took the name "Shimazu" from the estate, thus founding the Shimazu clan. He was also named "Lord of the Twelve Southern Islands", an oblique reference to the Ryukyus, in 1206[5]. The Shimazu would never actually exercise any direct administration or governance in, nor receive any taxes or tribute from, the Ryukyus until after 1609, but this centuries-old claim to the territory nevertheless was employed by the Shimazu in their justifications for the invasion of Ryukyu in that year.

Tadahisa remained based in Kamakura for some time, while he sent his retainers to Satsuma to administer the territory in his stead. During this time, he contributed to military efforts against the Ôshû Fujiwara, and accompanied Yoritomo in his relocation to Kamakura.[6]

Tadahisa first took up residence in Satsuma in 1196, building a castle there and subsuming Ôsumi province and parts of Hyûga province into his domain[3]; the shogunate formally recognized his claims to those territories by naming him shugo over all three provinces.[4] The Edo period han of Satsuma would prove to cover roughly the same territory.

Due to his relationship to the Hiki clan, Tadahisa was implicated in a 1203 uprising by that clan, and lost his positions as shugo and jitô as a result. He regained his titles and authority in 1205, but only over territory in Satsuma province; the Shimazu would only regain control of Ôsumi and Hyûga much later.

He died in 1227, passing on the position of shugo to his son, Shimazu Tadatoki. Tadahisa's other son, Shimazu Tadatsuna, went on to become founder of the Echizen Shimazu. Tadahisa's grave yagura can be found in Kamakura, a few hundred yards from the grave of Minamoto no Yoritomo, and alongside those of Ôe no Hiromoto and the founder of the Môri clan, Môri Suemitsu[7].