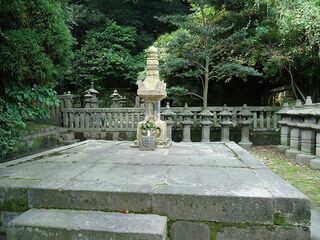 Shimazu Narinobu's gravestone at the Shimazu clan graveyard at Fukushô-ji, in Kagoshima

Shimazu Narinobu was the 26th head of the Shimazu clan, and ninth Edo period lord of Satsuma han. He is known for his policies of austerity and thrift.

The eldest son of Shimazu Shigehide, he was known as Torajumaru and Matasaburô as a child. In 1787, at the age of 15, he succeeded his father as lord of Satsuma. His adoptive mother was a daughter of Tokugawa Munetada of the Hitotsubashi Tokugawa clan. His retired father continued to play a prominent role in advising the young Narinobu.

Over the course of his reign, Narinobu escorted three Ryukyuan missions to Edo, in 1790, 1796, and 1806. He was elevated to the court rank of Upper Junior Fourth Rank, Chûjô (Middle Captain), in 1790, but as had become standard by that time did not receive a similar elevation in rank on the other two occasions.[1]

In 1807, Narinobu appointed Kabayama Chikara and Chichibu Tarô to be among his karô, as part of a complete overhaul of the domain administration. They oversaw reforms of the han school Zôshikan, and canceled a number of Shigehide's policies in favor of austerity programs. This earned the ire of Shigehide, who forced Kabayama, Chichibu, and eleven other clan retainers in 1808 to commit suicide, and twenty-five others to be exiled; some one hundred people were punished in total, in one fashion or another in what has come to be known as the Kinshirokukuzure Incident.[2] Narinobu, meanwhile, was forced to retire the following year, in favor of his 19-year-old son, Shimazu Narioki. In his retirement, he took on the art-name Keizan. He took up residence at the Shimazu clan mansion at Shirogane, in Edo. In 1835, he returned to Kagoshima for the first time in 25 years.[3]

Narinobu died on 1841/10/13 at the age of 69, at the Shimazu mansion in the Takanawa neighborhood of Edo, and was buried at the Shimazu clan cemetery at Fukushô-ji in Kagoshima, along with his mother and his two wives.

While he was succeeded as lord of Satsuma by his son Narioki, Narinobu's second son Shimazu Sadatake was adopted by Matsudaira Sadamichi and succeeded Sadamichi as lord of Iyo-Matsuyama han, and Narinobu's third son, Shimazu Tadatake, became head of the Imaizumi clan, a branch family of the Shimazu. Tadatake's daughter Atsu-hime would later go on to marry Shogun Tokugawa Iesada.[4]