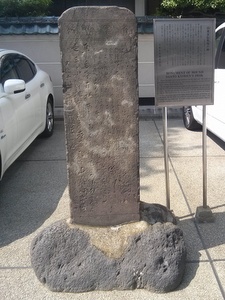 A stele erected on the grounds of Sensô-ji, associated with a burial mound erected for Kyôden's writing desk, which he lovingly used for over fifty years.

Santô Kyôden was an Edo period poet, writer, ukiyo-e artist, and tobacco purveyor[1] known primarily for his work on kibyôshi novels which he both wrote and illustrated himself.

After graduating from Shigemasa's tutelage, Kyôden began working with the publisher Tsutaya Jûzaburô, who persuaded him to move away from prints and to devote himself more fully to book illustration. Though he often was both the author and illustrator of a given book, he often signed the illustrations as Kitao Masanobu, the author cited as Santô Kyôden.

Like many artists/writers of his time, Kyôden did not restrict his activities to only prints, or only to one form of writing. He was heavily involved in poetry circles and other cultural social circles, and is known not only for his ukiyo-e images and kibyôshi, but also for his calligraphy, for kyôka poetry, and a variety of other forms of creative production.

Following the publication of his work Tama Migaku Aoto ga Zeni in 1790, illustrated by Utamaro and published by Tsutaya Jûzaburô, Kyôden fell afoul of the authorities. Though the book was set in the Kamakura period and featured Hôjô Tokiyori as the chief character, the authorities recognized it as a parody of the policies of Matsudaira Sadanobu. Kyôden was handcuffed for fifty days, and Tsutaya had half his property confiscated.[2]

In 1793, when he was in his early thirties, he opened a tobacconist's shop in the Kyôbashi district of Edo[3]; he would often mention or depict his own shop in his writings and print designs. Kyôden is said to have devoted his days to the shop, and his nights to the pleasure districts. He bought out the contract of his favorite courtesan, Tama-no-i, in 1797, and took her as his second wife.[4]

He lived for a time within the Yoshiwara, marrying two shinzô[5] over the course of his life and becoming quite familiar (tsû) with the names and identities of the various courtesans and teahouses, and with the ways of the district[6], becoming a rather prominent personality within the Yoshiwara, and the Floating World of Edo more broadly. One of his wives took up work as a hairdresser, reportedly even purchasing or being granted a license to serve as the official barber for the neighborhood, serving as an official agent for the local neighborhood government.[7]