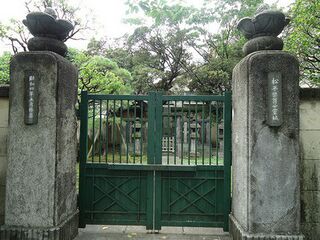 Matsudaira Sadanobu served as Tairô from 1787 to 1793, following the downfall of Tanuma Okitsugu, who was accused of fostering terrible political corruption. Sadanobu has been characterized as a Confucian conservative and moralist, whose administration saw a reversal of commercial and trade initiatives pioneered by his predecessor, as well as renewed enforcement of sumptuary regulations and the like.

Sadanobu was born the son of Tokugawa (Tayasu) Munetake, and grandson of Shogun Tokugawa Yoshimune. He served for a time as lord of Shirakawa domain in Mutsu province, beginning in 1783, and also studied for a time at the Kaitokudô, a merchant academy in Osaka, where he studied political economy under Nakai Chikuzan.[1] In 1784, in order to help address severe food shortages being suffered by his domain, and the resulting peasant uprisings, Sadanobu erected a shrine dedicated to Matsudaira Sadatsuna, founder of his lineage, within which Sadanobu placed a wooden image of Sadatsuna, a collection of objects associated with him, a copy of the house rules, and a document swearing his (Sadanobu's) dedication to fulfilling his obligations to his house.[2]

Sadanobu was named to the rôjû in 1786/6, and was named Tairô, or head of the rôjû, the following year. He launched the Kansei Reforms that same year. Among the most famous or significant sets of Reforms of the Edo period, the Kansei Reforms aimed to restore a Confucian order and sense of propriety to society. Incorporating sumptuary laws alongside a number of other policies, they operated on the belief that if everyone in society performed their role correctly - if farmers acted like farmers, and merchants like merchants, and not like samurai - and refrained from extravagance, all of society would fall into place, peace and Order would reign, and prosperity would result. These policies were thus not guided by what we would today recognize as practical understandings of the laws of economics, but did manage to have some positive effect, unlike the disastrous monetary policies of some other Edo period efforts at Reforms.

As part of his Kansei Reforms, Sadanobu brought the Hayashi clan school under shogunate control, rebuilt and expanded the compound, made it a site for the training of shogunate and domain officials, and eliminated from the curriculum any elements which his Confucian sensibilities deemed incorrect or inappropriate. It was at this time that the school was officially renamed "Shôheizaka gakumonjo." The Reforms also included a severe strengthening of censorship and its enforcement, leading much intellectual production to be circulated in manuscript form, so that it would not come into the hands of the printing and publishing censors.

His Confucian ideals led Sadanobu to attempt to "wean" the people of Nagasaki off of a "dependency on foreign trade,"[3] which he saw as possessing little value beyond the importation of books, medicinal products, and information (intelligence).[4] He sought instead to turn them towards agriculture and artisanal production (e.g. pottery), activities which he saw as the fundamental engines of a prosperous economy. To that end, he aimed to end Dutch trading at Nagasaki entirely, arguing that the savings from no longer paying the salaries of numerous translators, port officials, and the like could be used to more directly benefit the people of Nagasaki. Fortunately for the VOC, he never quite succeeded in ending their activity in the port, though he definitely earned their ire through a variety of policies, including reducing the number of Dutch ships permitted to call at the port each year from two to one. Sadanobu conceded, however, that the Chinese trade could not be ended, due, in part at least, to its indispensability in providing medicinal goods to the country.[5]

Sadanobu also attempted to curb the economic activity of Tsushima and Satsuma han. He was unsuccessful in the former case, as Tsushima officials successfully argued for the necessity of the goods they imported both for the domain and for the realm, and furthermore that continued relations with Korea was a right of their domain, granted and reaffirmed by the Tokugawa since the early years of the shogunate. In the end, Tsushima was permitted to continue its trade activities as before, including the annual acquisition of up to 100,000 kin of copper for export. Satsuma was not so fortunate, however, being burdened with a variety of restrictions permitting them to sell only raw silk and silk damask at the Kyoto markets, and requiring them to consume all other imported Chinese goods within the domain, prohibiting them from selling these other goods beyond their own domainal borders. As the expansion of domestic silk production had rendered silk, in particular, a less profitable commodity to try to sell, this had severe impacts on the profitability of Satsuma's entire Ryukyuan enterprise.[6]

In 1791, Sadanobu was named kaihen osonae goyô gakari (official in charge of coastal preparedness). He began implementing a variety of policies aimed at strengthening coastal defenses in Ezo, in the waters around Edo, and throughout the domains. In addition to requiring daimyô to report on their defense preparations, Sadanobu rolled back plans put into place under Tanuma Okitsugu to expand agricultural development of Ezo. Seeing these northern regions as a buffer zone against Russian incursions, he established a new post, the hokkoku gundai ("Warden of the North"), to oversee the defense of territories in northern Honshû, including the Tsugaru and Nanbu domains.[7]

The following year, he was named Chinkoku daimyôjin, or "Great Deity of the Pacified Land," by Shinto priests of the Yoshida Shinto family. A wooden image of his deified self was created, and Sadanobu made regular offerings and worship to the image for years afterward. He also developed his own personal religious or philosophical path, which he referred to as Shinbu, combining Shinto and the path of the warrior.[2]

Sadanobu also conducted a personal tour of the Izu and Miura peninsulas, as part of efforts to coordinate the defense of the areas surrounding Edo. However, upon his return to the city in 1793/7, he was informed that he had been relieved of his duties and was forced to step down from the rôjû council. He was then promoted to an honorary but far less influential position in the Tamari no ma. It was standard for top officials to periodically submit notice of their resignation to the shogun, so that the shogun's refusal of the request could be seen as re-affirming them in their position; at this time, Sadanobu's notice of resignation, normally just a formality, was actually accepted. Historian Mitani Hiroshi suggests possible reasons for his dismissal included his frequent unilateral action without consulting the young Shogun Tokugawa Ienari's regents[8], or the excessively ambitious scope of his plans for Edo's coastal defenses. Responsibility for foreign policy and coastal defenses was then given over to wakadoshiyori Hotta Masaatsu and kattegakari rôjû Toda Ujinori.[9]

Following his death in 1829, Sadanobu was buried at Reigan-ji, a temple near the Shirakawa han mansion.

John Whitney Hall lays the blame for Japan's economic and military weakness in the 19th century at the feet of Sadanobu, arguing that if Tanuma had not been ousted from office, and had been allowed to continue his line of economic plans, Japan might have moved even earlier, and more independently, towards industrialization.[10] Robert Hellyer counters, however, that Sadanobu did not in fact reverse or dismantle the systems Tanuma put in place, and suggests that Sadanobu's own policies might be seen as streamlining Japan's foreign relations. In the 1780s-1790s, Sadanobu imposed the significant reduction of Dutch East India Company missions, and engaged in negotiations with Tsushima han & the Joseon Court which ultimately resulted in the near abolition of Korean embassies to Edo entirely, two steps which brought significant financial savings to the shogunate.[11]