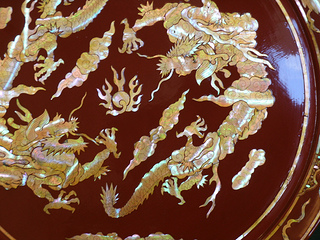 Lacquer is believed to have been employed in the Ryûkyû Islands since the Jômon period, emerging roughly concurrently with its earliest use in China and Japan.[1] The adoption or emulation of many elements of Ming Dynasty Chinese culture by Ryukyuan elites from the late 14th century onward had a profound impact upon Ryukyuan lacquerware production; however, influences from Japan and Southeast Asia, as well as uniquely Ryukyuan innovations and tastes, played key roles as well in shaping Ryûkyû's distinctive lacquerware tradition.

Lacquer sap taken from the tree is initially a white, milky color, and grows brown and then black as it is exposed to the air. Sometimes vermillion pigment is mixed with the lacquer to produce a red color. The lacquer is then placed under sunlight or artificial UV light to turn the blackening lacquer transparent, allowing the red color to show through; though the production of red lacquerwares is not unique to Ryûkyû, the strong sub-tropical sunshine there, combined with warm temperatures and high humidity are often cited as key factor making the Ryûkyûs particularly ideal for lacquerware production.[2]

Chinese techniques of lacquer carving never took off in Ryûkyû, but instead, techniques of building up designs in relief using a lacquer putty, called tsuikin, became a distinctive element of Ryukuyan lacquerwares. This technique is often said to have first been developed in 1715 by Higa chikudun peechin Jôshô, based on Chinese techniques.[4]. However, scholar Tokugawa Yoshinobu[5] indicates that the technique was already employed in Ryûkyû prior to that time.[6]

Mother-of-pearl inlay techniques, known as raden, employed thin slices of the turban shell (J: yakôgai; Lunatica marmorata),[1] a sea creature native to Ryukyuan waters, to insert shimmering, rainbow-colored designs into lacquered pieces. Raden is traditionally said to have first been introduced to Ryûkyû in 1636 by Zeng Guoji (J: Sô Kuniyoshi) from Fujian, who was then appointed kaizuri-shi or aogai-shi ("master of lacquerware") in 1642. Further, the technique for preparing the shells is said to have been introduced by Ômitake chikudun peechin Hyôbu in 1690, who had studied such techniques in Hangzhou. [4] However, documentary evidence and extant objects show that raden techniques were known in Ryûkyû by the end of the 14th century, if not earlier. Turban shell was a major export of the Amami and Ryûkyû Islands in the 11th century and very likely for centuries prior to that.[7] Mother-of-pearl-inlay objects were regularly among tribute goods or gifts given by the Ryukyuan court to the courts of China and Japan from the 1430s onward, and raden objects as well as the raw mother-of-pearl materials were among the kingdom's prominent trade goods. The export of raw mother-of-pearl was limited between 1436 and 1596, but operated on a large scale previously, and afterward.[8]

As elsewhere in East Asia, Ryukyuan lacquerwares took many forms, but chiefly included a variety of types of trays, dishes, and boxes. Carrying cases called sagejû (提重) or jikirô, much like their Japanese cousins, carried a number of boxes, within which could be stored chopsticks, small dishes, and a variety of other objects required for a meal. Similarly, other forms of lacquerware cases, such as the tundabon, were often carved precisely to the shape of the porcelain or ceramic dishes, or other objects, they were to contain. Tundabon, sometimes described as presentation trays, were large, round, legged trays containing a series of small plates, in which small dishes would be served. Simpler legged trays (which might also be described as low tables), known as shoku, were also common. Hot tea was often carried in a lacquerware container known as a taakuu. Hexagonal in shape and tapering towards the bottom, these carriers contained a tin bottle for holding the tea, surrounded by cotton padding to hold in the heat.[9]

Lacquerware objects, especially with mother-of-pearl inlay, were common tribute or gift items sent to both China and Japan; an entire office, the kaizuri bugyô ("Mother-of-Pearl Magistrate") was dedicated to overseeing the production of these and other objects.

Ryûkyû lacquerwares are among the most common Ryukyuan artworks to find in museum collections in the West, alongside pottery and textiles; paintings and works of calligraphy are far less common.

Often built around a core of deigo wood, Ryukyuan lacquerwares were traditionally exceptionally lightweight. In modern times, however, the wood of the gajumaru (banyan tree) has replaced the use of deigo.[10] Ryûkyû lacquer also often made use of basketry skeletons for boxes and other objects.

It is often said that the lacquer tree was never native to Ryûkyû, or even that the tree could not survive in the Ryukyuan environment. This notion was advanced in works such as the 1889 Ryûkyû shikki kô ("Thoughts on Ryukyu lacquer") by Ishizawa Hyôgo, and continues to be widely repeated. However, the government of the Ryûkyû Kingdom actively taxed the growing of lacquer trees beginning in 1635, later exempting the trees from taxation beginning in 1669; other evidence meanwhile shows that lacquer trees were grown in the islands even before the 1609 invasion by Satsuma.[11] While Ryûkyû is believed to have also imported raw lacquer from Japan as early as the 1420s, records from that same decade also show examples of Chinese envoys purchasing raw lacquer natively grown in Ryûkyû,[12] as well as Ryukyuan lacquerwares.[3]

The earliest extant lacquerware objects from Ryûkyû include a number of funerary urns from the Momojana tombs, located near Nakijin gusuku in the northern portion of Okinawa Island. Dating to around 1500, these are said to be the tombs of a number of members of the Shuri nobility who fled north during what they felt to be the "tyrannical" reign of King Shô Toku (r. 1461-1469). A series of lacquerware coffers in a private collection on Kumejima, bearing designs similar to those at Tamaudun (built 1501), and said to have been gifts from the court of King Shô Shin in 1500, are also among the earliest known extant examples of Ryukyuan lacquerware.[13] The container in which the bones of King Eiso (d. 1299) are entombed is also said to have been lacquered; if true, this would extend the earliest known production of lacquerwares in Ryûkyû back several centuries.[3]

According to some accounts, Ryukyuan lacquerwares were primarily red and featured particular patterns and designs. Following the invasion, Japanese demand for Ryukyuan lacquerware increased significantly, and the kaizuri bugyôsho (Office of Lacquerwares) within the royal government was expanded; most Japanese customers were more interested in works they could pass off as "Chinese-style" (karamono), and so styles and techniques adapted to some extent in order to cater to their tastes and desires. Ryukyuan lacquerware artists were increasingly sent to China to study Chinese styles and techniques. Late 20th to early 21st century lacquerware master Maeda Kôin said that the designs came to have less meaning or significance, but to increasingly be designs used simply to appeal to the Japanese demand, including landscapes, dragons, phoenixes, and other creatures, as well as peonies and imaginary islands. Many of these works were inscribed with Chinese phrases, signatures, and dates so as to better pass them off as Chinese or Chinese-style.[14]

Even so, Maeda has also noted that some lacquerware objects in the collection of the Urasoe Museum of Art dating back some 500 years reflect a strong consistency in the tradition over the centuries - i.e. little change throughout the early modern period.[3]

After the fall of the Ryukyu Kingdom, beginning around 1882, merchants from Osaka, Kagoshima, and elsewhere began to enter the Okinawan market in increasing numbers; catering to these merchants, Okinawan lacquerware artists began to shift from imitating Chinese-style works to producing vermillion (red) lacquerwares decorated with stereotypical Ryukyuan designs desired by mainland Japanese customers.[3]

Today, the Urasoe Art Museum is home to the most extensive collection of Ryukyuan lacquerwares in Japan; though notable collections also exist in mainland Japan, Europe, and the United States, some of the finest pieces are said to be those held by the Palace Museum in Beijing.[3]