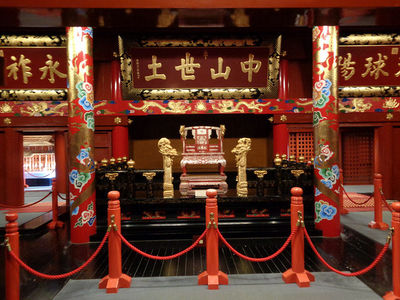 Maeda Kôin was a master of traditional Ryukyuan lacquerware. He was one of the primary artisans who reproduced the royal throne, calligraphic plaques, decorated pillars, and other lacquerware objects for the restoration of Shuri castle in the 1980s through its opening in 1992, and for display and use in reenactments at the castle in the years since then. He was designated by Okinawa prefecture as a holder of Intangible Cultural Heritage, and served as an advisor to the prefecture on traditional arts.

Originally from Ôgimi village in northern Okinawa, Maeda graduated from the University of the Ryukyus, and was then introduced by painter Adaniya Masayoshi to a job as a designer at the lacquerware company Benbô, the leading producer of contemporary lacquerware designs in Okinawa at the time.[1] He began showing his own work at exhibitions five years later. In 1968, he quit that job and opened his own "Maeda Lacquerware Atelier."

In conjunction with the restoration of Shuri castle, Maeda created a red-lacquered, gilded, and painted royal throne with mother-of-pearl inlay, based on portraits of King Shô Shin and other documentary sources, a project which took about two years. He also produced many of the plaques which now hang over the castle's gates, as well as reproductions of those bestowed upon the kings of Ryûkyû by Qing emperors.